So yeah, we’re living in Germany, and it is a Christmasy kind of place.  For over a month, we’ve been inundated with Christmas markets, mulled wine, gorgeous wooden ornaments, and the like.  Now all we needed was some snow.  It has been raining off and on for two weeks here, so we decided to drive south to Mont Blanc in France.  As I’ve said before, with the kids all grown up, we have new traditions to keep alive.  One of them is to do something really fun on Christmas day, and who won’t agree that skiing Mont Blanc is totally fun?!!

We actually skiied Les Houches since we are a bit rusty, and the slopes of Chamonix looked frightening!  We haven’t really skiied regularly since we lived in northern Japan, but it is like riding a bike, right?  At any rate, we couldn’t have asked for a better skiing area, at the top of the mountain, there was a veritable playground of small lifts and runs…just perfect for me, the wimp.  Jim tried a lot more, but I was content to take it slow.

Now the thing is, one day was enough for me, and I knew this going into to it, so my goal was to have a wintery good time without overdoing the skiing bit, and here’s what I came up with.

My Top Five things I did before, after, and maybe a little during the actual skiing on Mont Blanc.

1.  Sit in front of a fire and read a good book.  This is what I did the whole first day that the rest of the family went skiing.  I just needed a day off, time to relax.  Quiet time.  Oh how it felt so good.  Luckily, the restaurants and hotels, and hang out places throughout the region usually do it up with a great fire.  I just had to go downstairs in my hotel (Auberge de Beau Site) for some heat therapy.  The whole family repeated this with me in the evening of Christmas day as we sat around and played all kinds of board games while sipping the local bière and Le Chocolat Chaud Ancienne (Hot Chocolate with whipped cream, but since it sounds so cool, can’t possibly have all the calories, right?)

2. Eat Fondue, Raclette, Tartlilette,  or any other Savoyarde food.  This is the one I did, well, non-stop.  You just can’t help yourself.  I had my first ever real fondue, not the melt the chocolate and dip strawberries kind, but the real white wine and some cheeses kind.  I have no idea what cheese was used in ours, but really does it matter?  Oh, was it ever good! 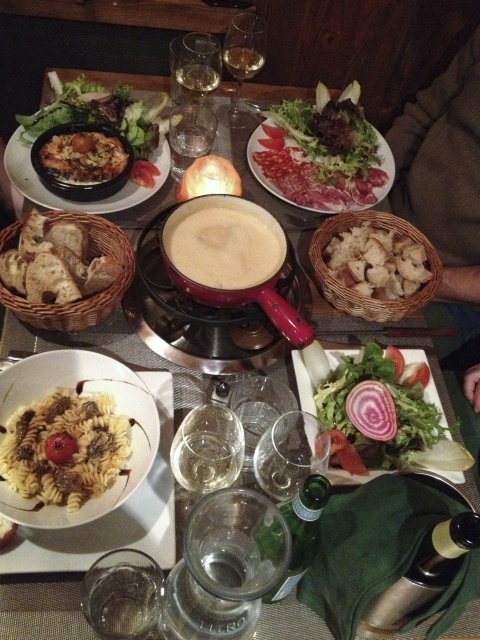 We didn’t just eat cheese, although, I’m not sure if my body really believes that or not, because we had it a lot!  But we had one traditional French “mountain” breakfast which consisted of the most dense baguette I’ve ever had, eggs, musli, yogurt, bacon (which is almost as ubiquitous as cheese anyway) and bowls of coffee.  It was just the perfect feast for traipsing around the mountaintops for a day.

It seems all Savoyarde food is hearty.  They had to eat something rather substantial to keep them going.  We had hearty meat, like sausages, pork chops, beef cheek stew.  We had hearty potatoes, with more hearty cheese.  We had hearty wines to go with it all.  It’s going to take me the whole first quarter of 2013 to work this off, I tell you…

3. Ice skate or Sled – I couldn’t believe how many places in the Mont Blanc area had organized hills for sledding.  Sleds were everywhere.  Even on top of Mont Blanc, an area was cordoned off for the sledders.  The sledders!  Of course, Erika almost bought it on one of the fence posts, but like my Hong Kong taxi story, fence posts will think twice before tangling with her.  (Like mother, like daughter, they say.)

I only saw one small ice rink, but if you didn’t have to rent their skates, it was free!  You can’t beat that.  It was in the small town we stayed in and there were so many families with small children just outside enjoying the hills.  It had a tiny rope tow for beginner skiing, a sledding hill, and an ice rink, all right there. 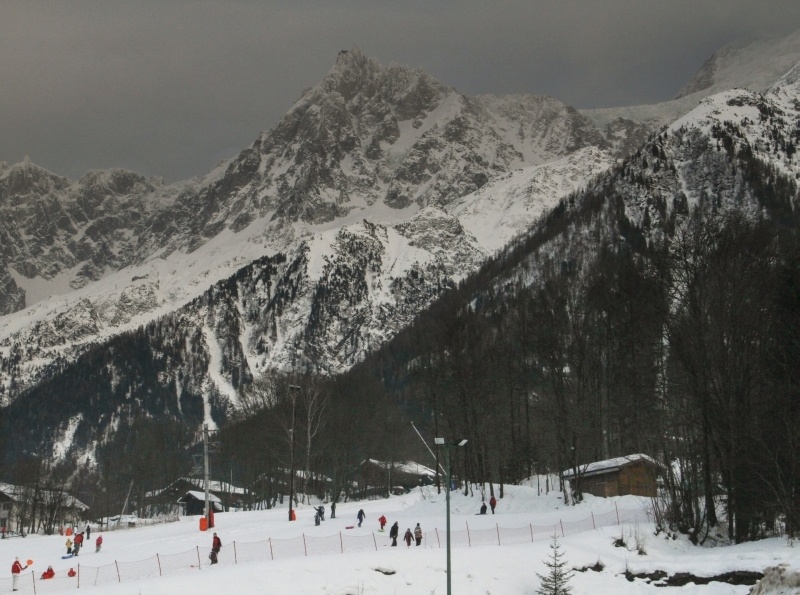 4. Take one of the gondolas up the mountain just to walk around and take photos, or get a coffee with a view, and some great people watching.  You just don’t realize how funny you look trying to grace your way off the tow rope and down the slope until you’ve watched plenty of other people botch it up.  Yep, I must look really funny….hmmm.  But really, it’s so freeing to ride the lift to the top of the mountain, meander around, take photo after photo and marvel at the skill of some people, the perseverance of others, and the majesty of of it all.  I highly recommend you try it.

5. Shop – Local products abound, like the wines, sausage, and cheeses.  Mmmm.  I could spend hours translating what was in the sausages, let alone taste them.  We tried sausages with cheese, pork sausage, beef sausage, olive sausage.  At one of the restaurants, they served us sausage as their “amuse bouche”…um yeah!  My bouche and my brain was amused, I must say.  And I’ve already lauded the ample supply of cheese, cheese, cheese.  I didn’t trust myself.  I wanted to bring them all home.

You can, by the way, shop for more than food.  One thing I always look for when traveling is a t-shirt in that language.  Have you ever noticed that so many t-shirts are in English, no matter where you are?  What is up with that?  Luckily, though, in France they love their language and there were plenty of mugs and t-shirts sporting it.   So even for someone like me, who is not really into shopping, Mont Blanc was tempting…tempting I tell you.

I don’t think we could have asked for a more Christmasy Christmas.  Les Houches delivered.  We even greeted St. Nick as he rode in on his horse-drawn sleigh with what?  You guess it, some more mulled wine and cheese!