Living in central Europe, Jim and I are always looking for ways to escape the winter cold. This winter we decided that a Moroccan Road Trip would be just the fix. We expected warm and sunny weather, and even though it wasn’t quite as warm as we expected, it was a sweet respite from Germany. We packed up, grabbed some friends, and flew off. We landed and started in Marrakesh! What a magical city. From watching the food stalls go up at the Jemaa el Fna Market to the stunning sunsets of El Jadida and Essouira, Morocco is a fantastic place to wash away the middle of winter blues. 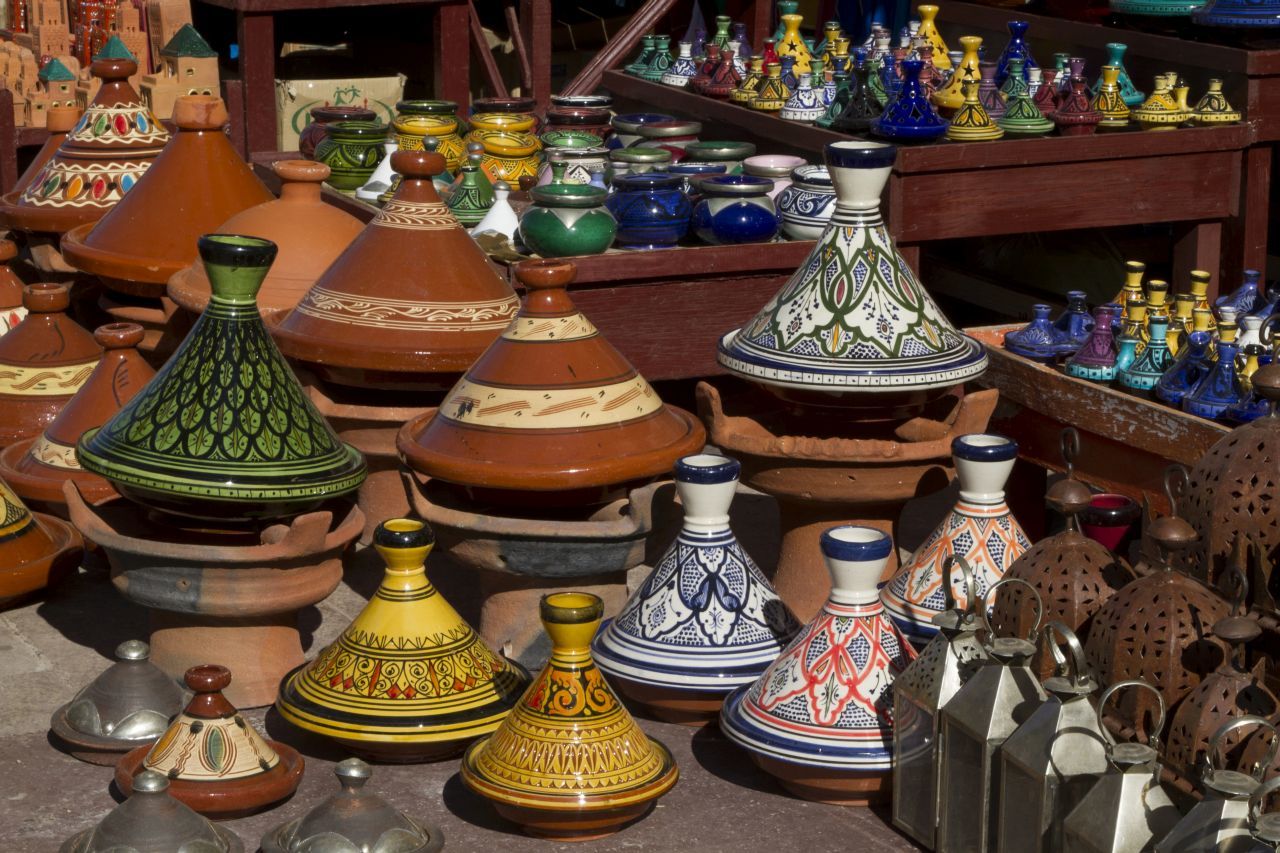 Maybe It’s Not a Carpet-ride, But Marrakesh is Magical!

Low cost airlines are delivering a steady stream of travelers, tourists, and expats to Morocco every day. With the fares so cheap, it was impossible to pass on a trip of our own. Without much more thought than finding the ticket that worked best for our timing, we were on our way to Marrakesh, our magical introduction to Morocco! Heading to a new country it’s great to follow a good Morocco itinerary, but  one where we leave room to be a little spontaneous. We’ve learned that it’s always a good idea to at least have the first night’s stay planned and booked. Our plane arrived in the evening with little time to find a place to spend the night, and with four of us traveling together, it would be that much more difficult to find something last minute. 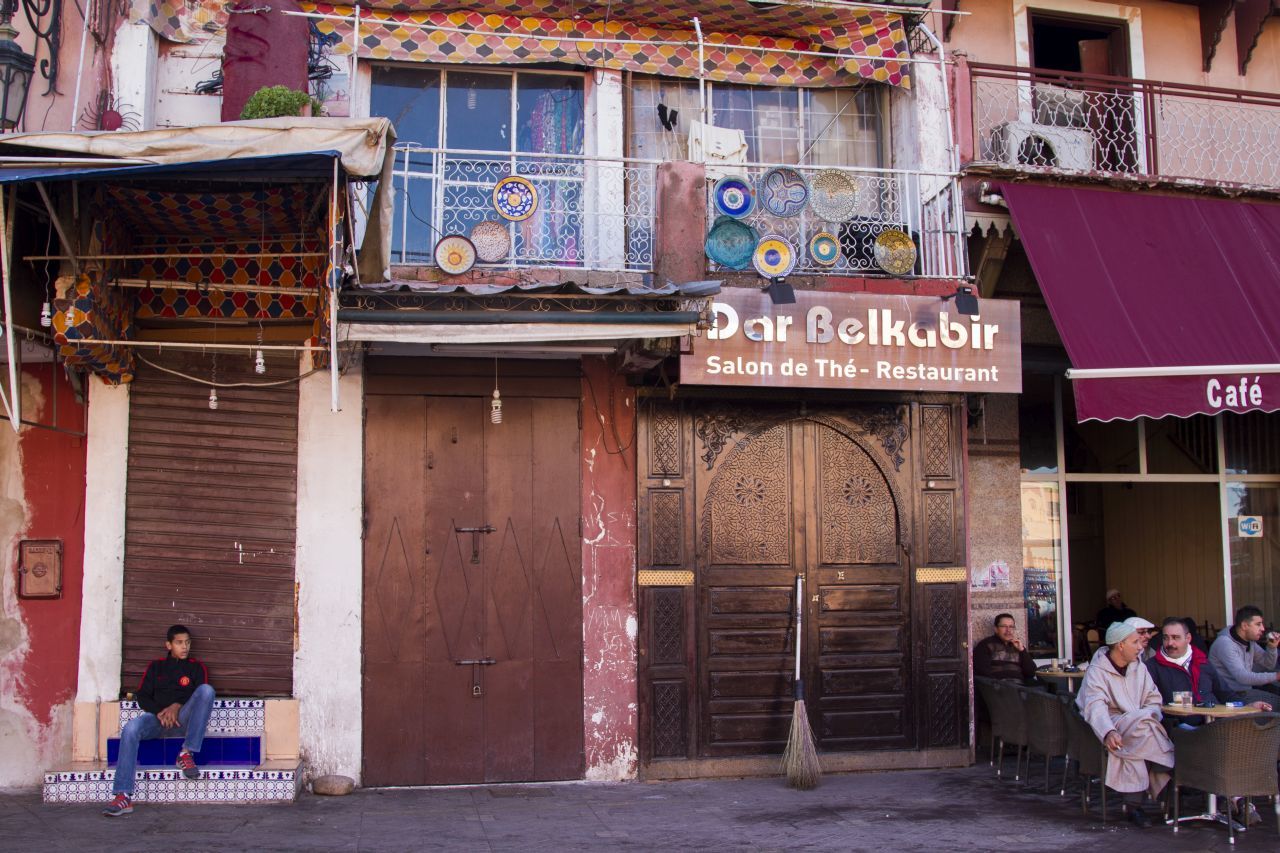 Going through the usual online booking sites, we found what seemed like the perfect place, the Riad Coram, just inside the medina. But when we contacted the riad owner, Nicole, asking about transportation options and parking (if we had our rental car), she let us know that parking would not really be advisable and that one night in the medina just wasn’t enough. If we only had one night we should stay nearer to the airport in the new town. The medina experience was what we were going to Marrakesh for, so we instead asked Nicole to extend our stay to two nights and arrange for transfer from the airport. Of course, if we had more time for our Morocco adventure, a longer stay in Marrakesh would have been fantastic, but the two nights worked out beautifully. 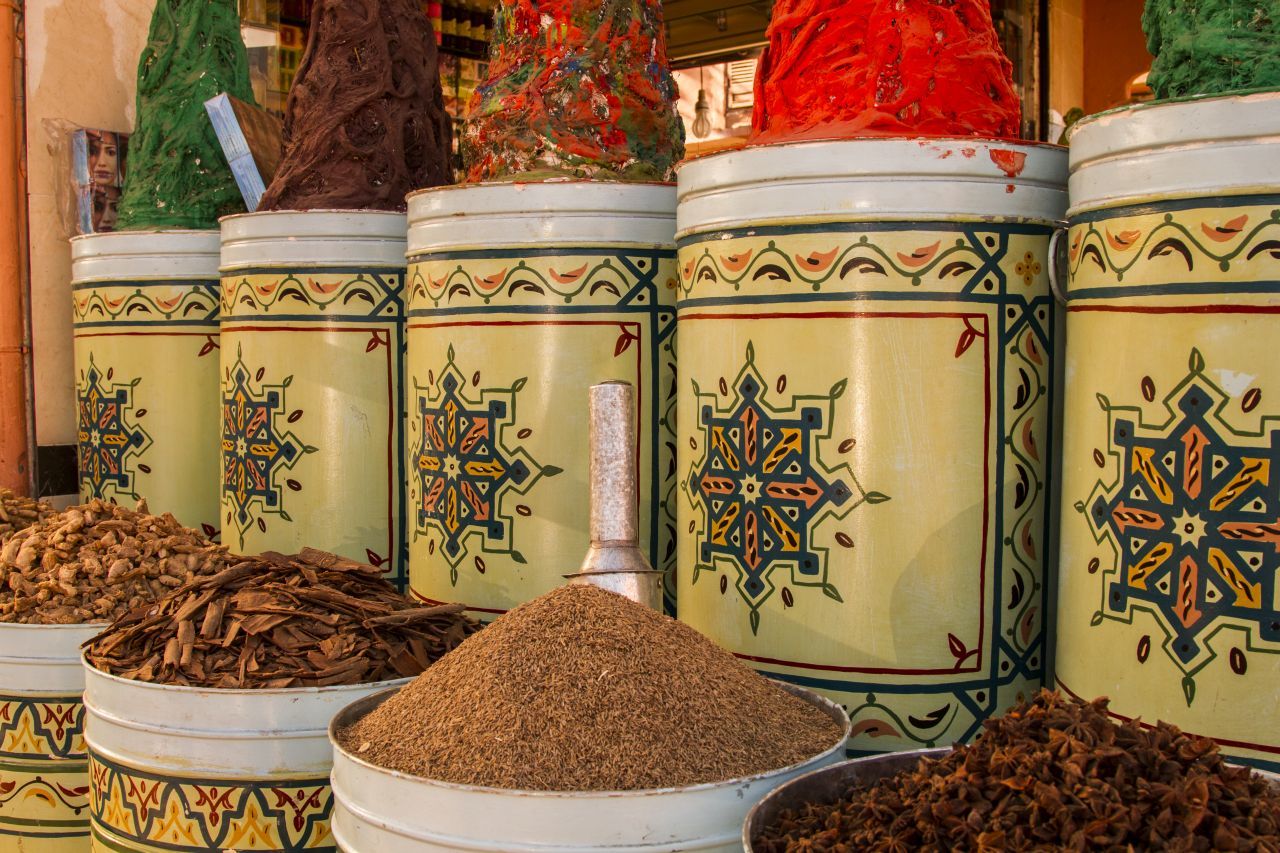 Our first night in Morocco was a kaleidoscope of color and sound. Nicole’s van picked us up at the airport during one of the busiest times of the evening. There were buses, vans, trucks of all sizes, horse drawn carriages, donkey carts, bicycles, motorcycles, scooters and mopeds of every imaginable variety. At one point we had to wait at the intersection onto the main boulevard. All traffic came to a stop and did not move for 15 minutes. Finally we asked Jamaal what was happening. He told us some big wig was coming through. Another brush with fame we thought! But there was no way of knowing who it was as the motorcade with sirens and flashing lights screamed past at top speed. 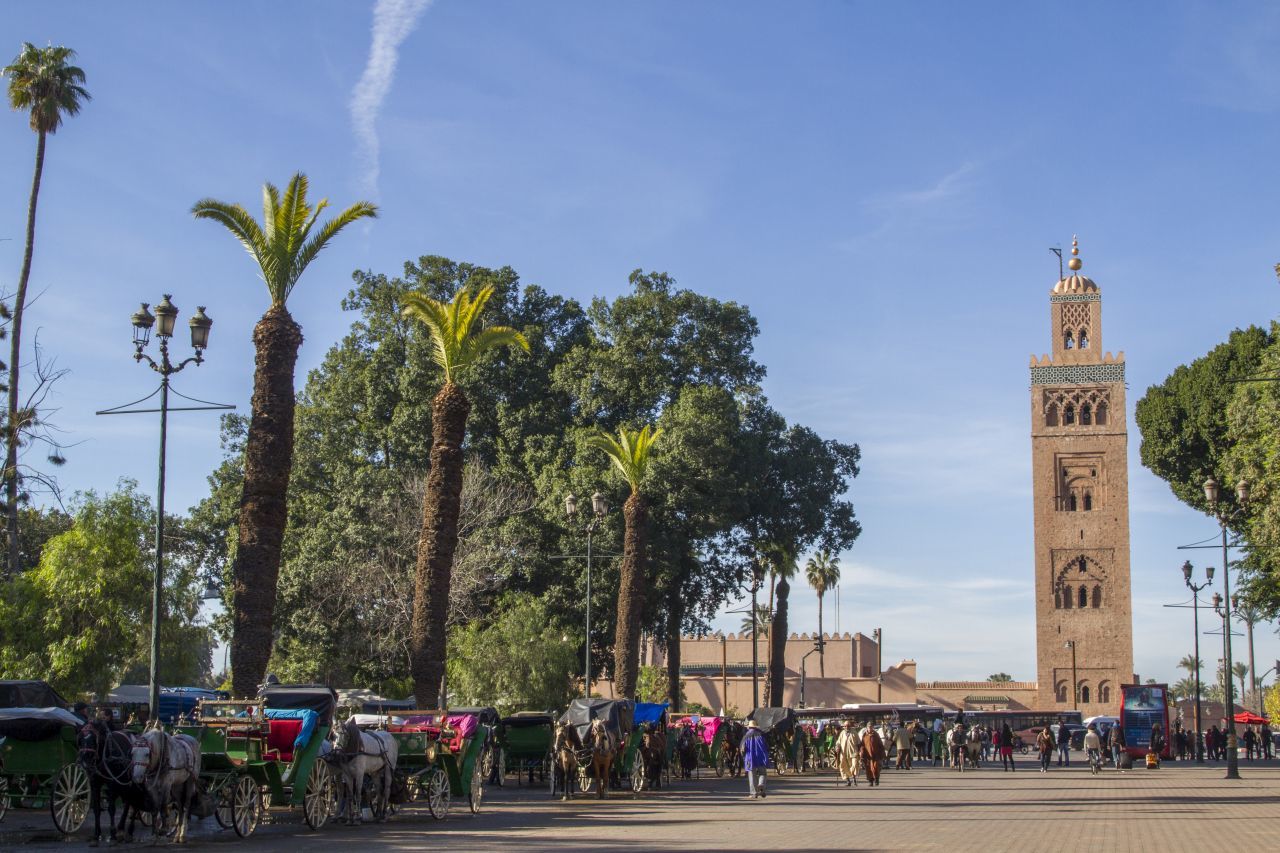 In the medina, we soon realized Nicole was right, there was no way we’d have found the riad or parking for even a tiny car. Jamaal parked at the end of an alley that had been getting smaller and smaller the longer we drove it. I was wondering what he would do when it finally got too small to continue when it finally opened up into a small square. We parked and walked a confusingly winding path through narrow passageways for about three minutes that  eventually led to Riad Coram, our oasis in the center of the medina. 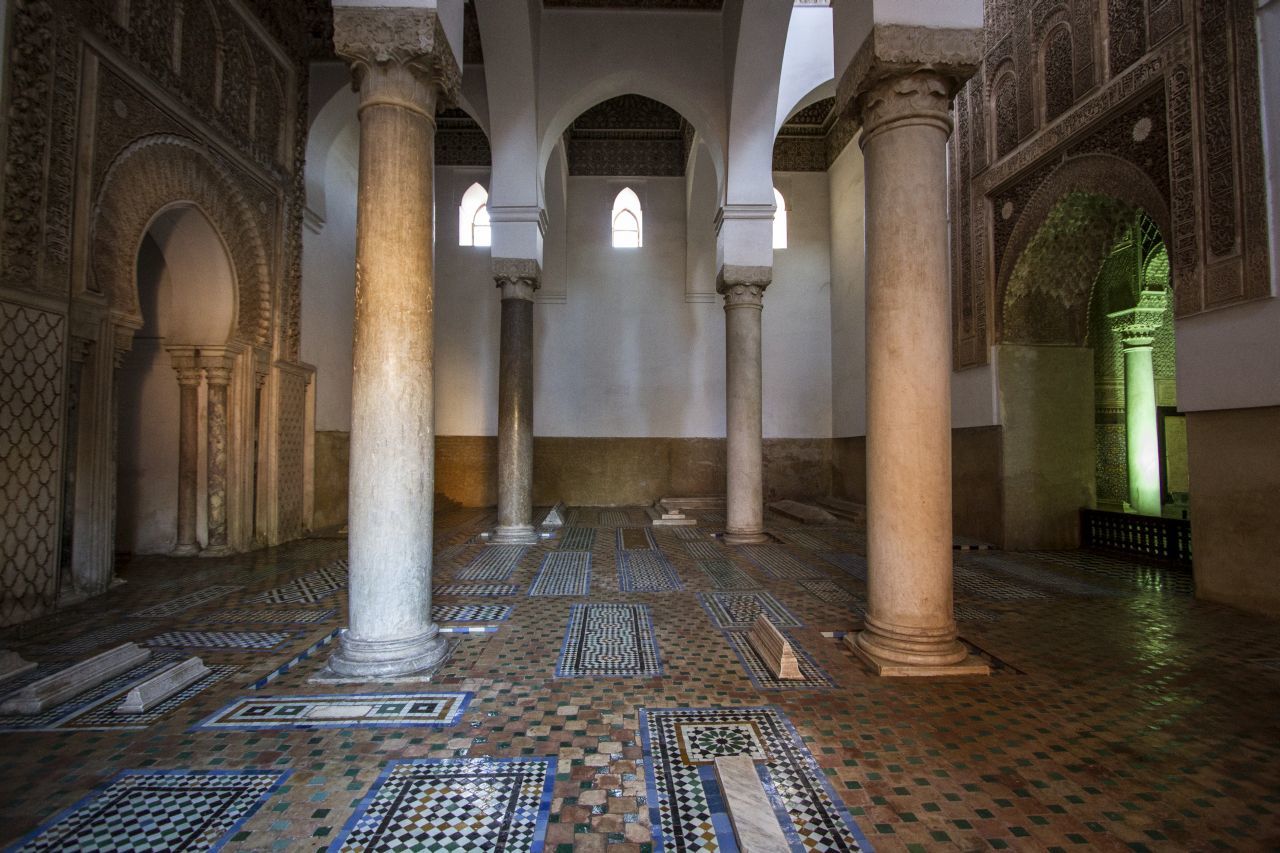 We went out after checking in for an evening stroll with Nicole so she could show us around her little corner of the old town. Although it was getting past evening now, it seemed like the city was just coming alive. The crowds were growing thicker and closing in as we tried to make our way through the narrow streets and alleys past shops selling everything from eggs to foam padding for mattresses while watching out for the mopeds and donkeys coming through at a haphazard pace. The evening stroll was exhilarating and exciting, all of the senses were involved and it was nearly impossible to take it all in.  After a tajine dinner and a nice hot mint tea we managed to find our way back to the riad without Nicole’s help and settled into our warm, comfortable beds. Nicole had turned the heat on for us about an hour before she expected us so the rooms were nice and toasty. 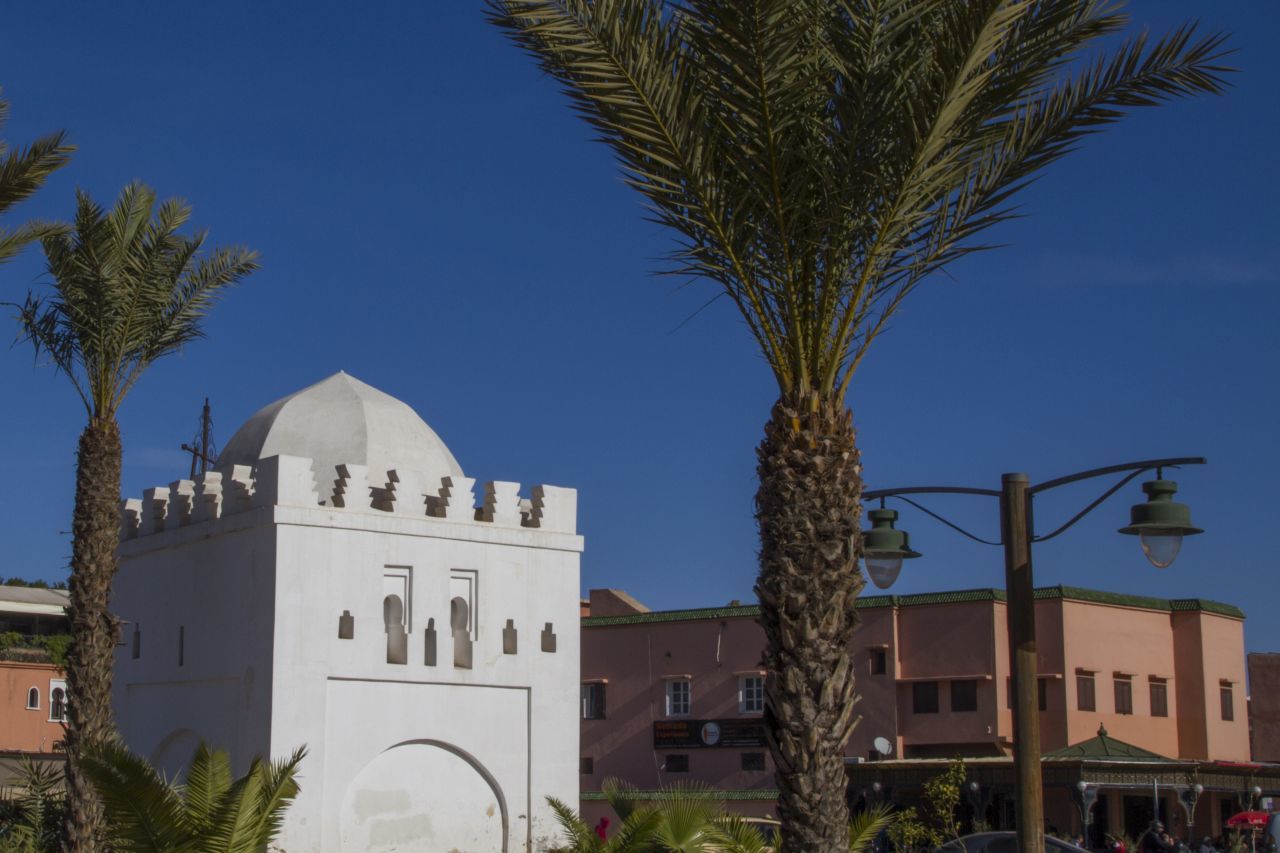 We woke to the mesmerizing sounds of the medina coming back to life around us. A mother calling to her child, the bray of a mule somewhere in the distance, neighborhood dogs competing for a scrap or bone, and the gentle echo of the call to prayer from a nearby mosque. Nicole put on a nice spread but we wanted to get out into the daylight so we ate quickly and were soon on our way into the heart of the medina. The Jamaa El Fna is the heart of the city. 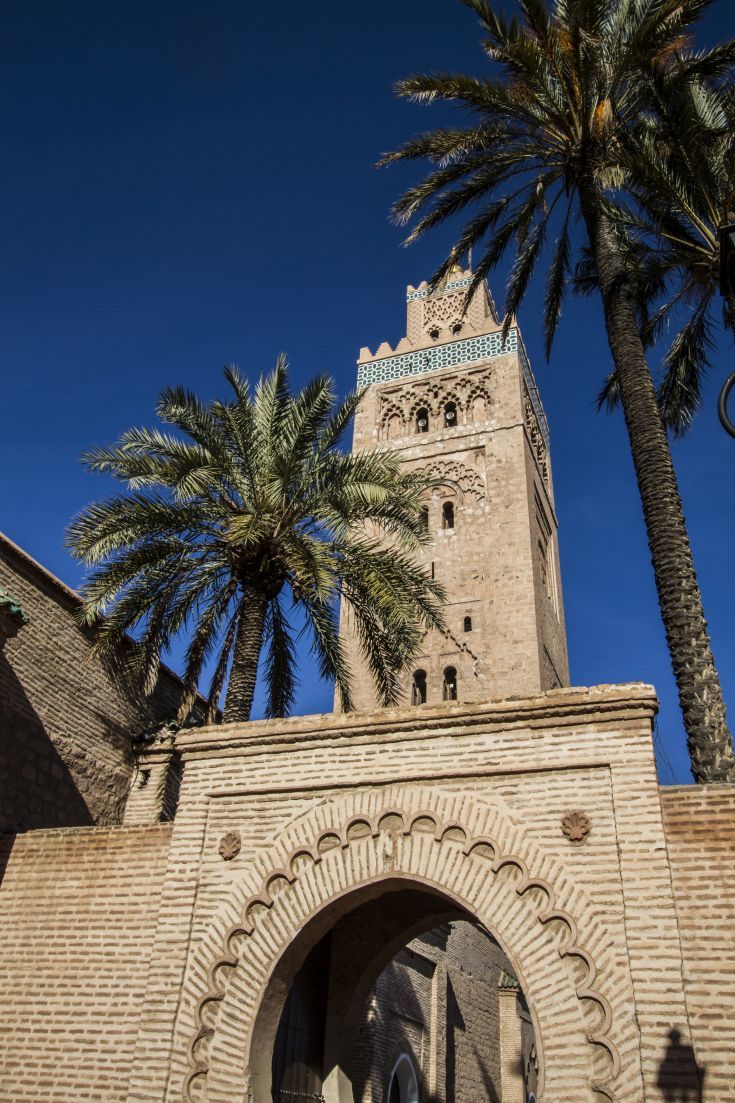 Here you can really feel the pulse of the old town as everything comes together at this great square of touts, food carts, cafes, fortune tellers, fruit carts, dancers and buskers, you name it. If it is to be found in Morocco, you can bet you’ll find it in the Jamaa El Fna. We easily spent an hour or two just wandering around the massive square taking in the sights, sounds, and smells of the late morning. Nicole had told us about a rooftop cafe that would be perfect for watching the sunset over the median and seeing the square transform from day to night. As it turned out this was also a prime spot for people watching. The whole plaza opened up in front of us as we sat and sipped mint tea or fresh squeezed orange juice. A mother and children selling fruit laid out on a blanket spread on the ground. The little boy went off by himself with a tiny stool and a small box of pastries. We never saw him sell one, but it wasn’t for lack of trying. When his box fell over and spilled its contents on the ground he ran crying to mom. She scolded him gently but then quickly scooped the goodies back into the box and with a furtive glance shooed him off back to his selling grounds.

We could have sat in the cafe and watched the magical world of Morocco on stage around us but there are more sights to see in Marrakech than the Jamaa El Fna so we paid for our teas and promised to return later in the day to sit and watch the square transform from day to night. For now, we had ancient tombs, grand palaces, and towering mosques to discover and photograph!

Here is the list of all of our Morocco articles. We hope that not only will they inspire you to visit Morocco, but they’ll give you plenty of things to do to add to your list!
Intriguing Food Stalls of Jemaa el Fna, Marrakesh
The Gorgeous City of El Jadida
Exploring the Souk and Tanneries of Fez
Visiting Volubilis – A UNESCO World Heritage Site
Basking in Blue in Chefchaouen
What to See in One Day in Essaouira
The Shining Gem of the High Atlas Mountains – Ben Aithaddou
Sensory Delights at a Berber Market
Sunset on Morocco 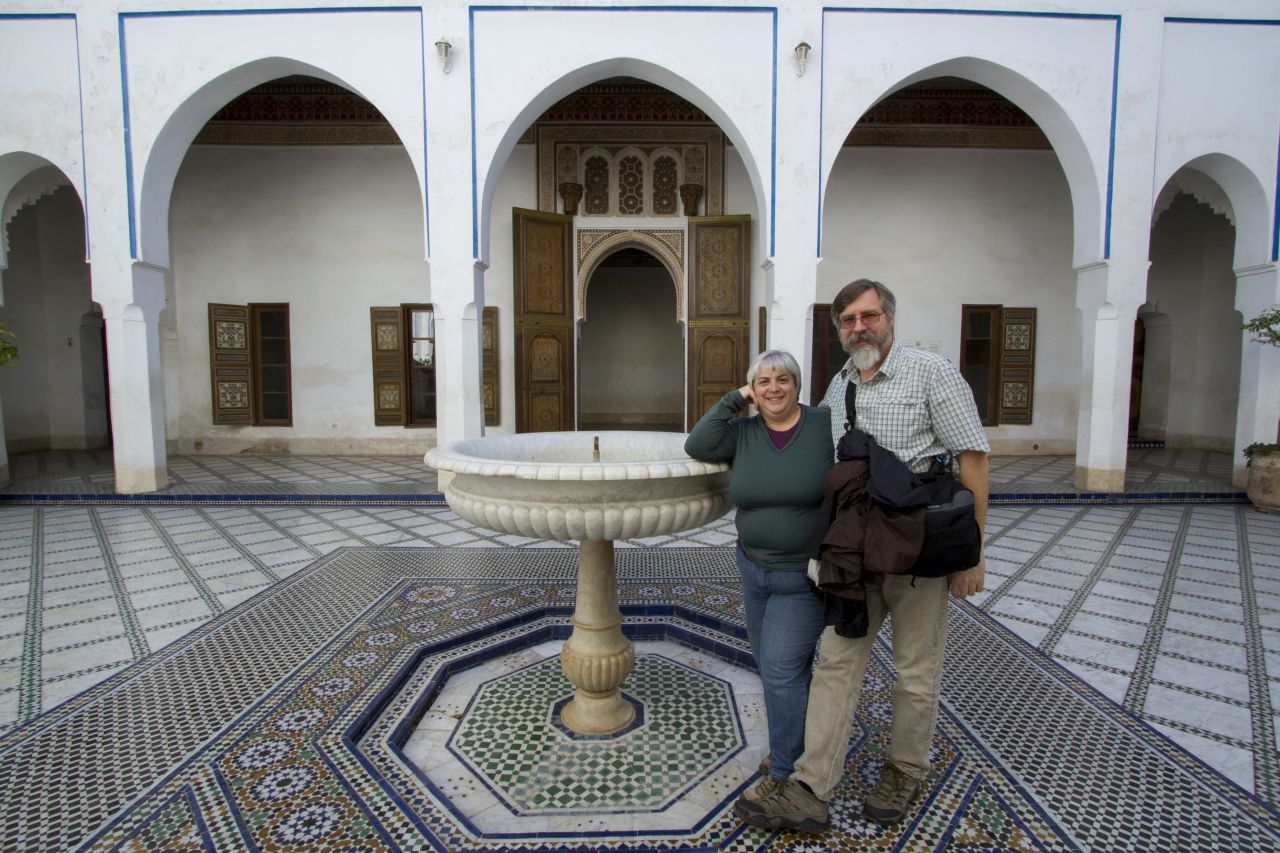 Getting to Marrakesh by air from Europe is simple and cheap. Ryanair flies from Dublin, London, Frankfurt (Hahn), Eindhoven, Dusseldorf, Brussels, Paris, Madrid, Milan, Pisa, Rome, and a few other smaller locations. Easyjet will fly you in for cheap as well, they have flights from Glasgow, London, Manchester, Berlin, Paris, Basel, Geneva, Nice, Bordeaux, and more.

Have you been to Marrakesh?  Which part was the most magical for you?

37 thoughts on “Marrakesh, a Magical Intro to Morocco!”