What do you do on a cold, wintry gray day and you want to add some color to your day? You drive a few hours, into the Czech Republic, and go to a beautiful pastel-colored town filled with houses that could double as any petit four with the white filigree trim. 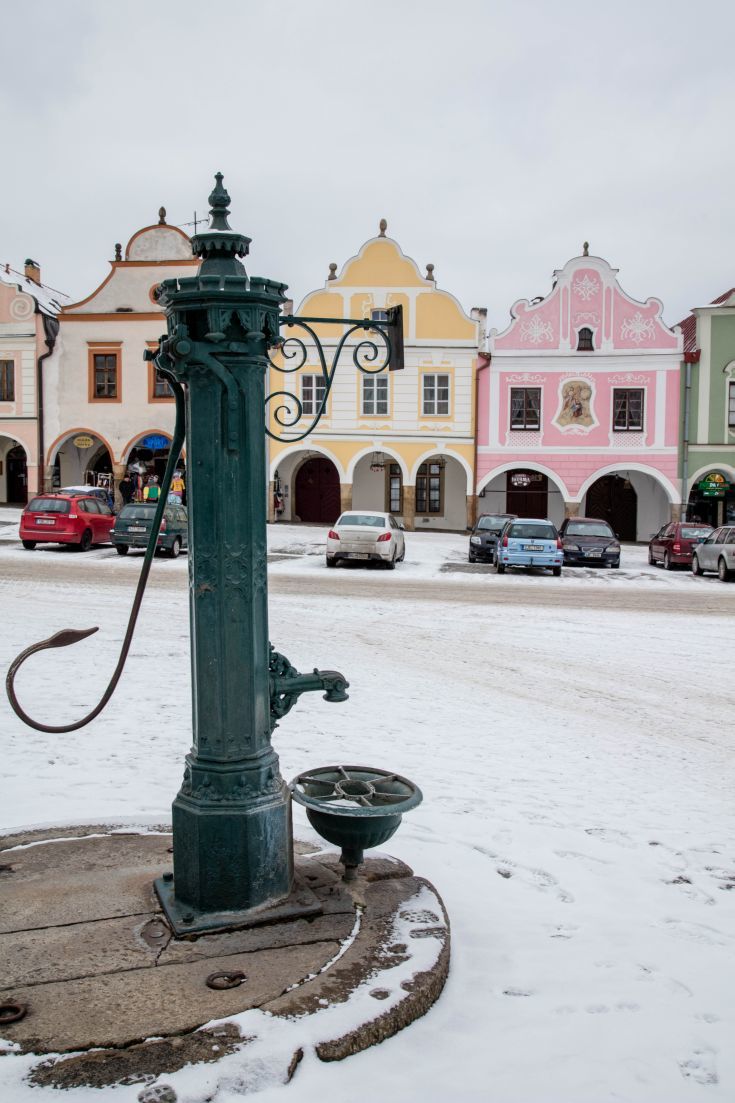 The Romantic City of Telc Only a couple of hours drive from Prague, Telc is a great place to stop and explore. The town is situated in the middle of three fish ponds, so it almost seems like it is on an island. As you approach by car, there are plenty of parking lots. The town is very small and compact, so it is all within an easy walking distance. We drove inside the triangle, but not into  the town square. We thought that the town square wouldn’t allow parking, but it unfortunately it did. Upon our very first glance, we exclaimed how obvious it was that this stunning town has been inscribed on the UNESCO World Heritage list. The gabled architecture of the houses and the elegant designs and trimming make you feel like you’ve just stepped into a fairy tale.  We would have liked to get rid of those pesky automobiles parked out in front of them and changed them into horse and carriages, but hey I like to drive, too. The UNESCO designation came in 1992 and just walking around the middle of the town you can easily take in the 14th century castle and the charming architecture.  The manor houses were all built during a time in the town’s history that was very prosperous, and each noble tried to outdo the other as far as how high and how elaborate they could build and decorate their houses.  If you look closely, you’ll notice that the attic window is typically much lower than the upper portion of the house.  It was a a lot of show. The town has had a turbulent history of conquerors coming in and razing it to the ground, to have a new ruler take over, settle things, and then not have any heirs. In the 14th century the current rulers took charge, dug the ponds and built a wall around the fortress and town to protect it, but then a natural disaster came along. These houses were built of stone after a devastating fire in 1386, and later a Gothic castle was built on one corner of the square.  It is all worth visiting. It was very cold the day we went, and there were hardly any tourists, maybe ten total, us included. A light layer of hard, almost ice, snow covered the ground, and as we crunched out way around the triangular square, our mouths gaped at the beauty. It was a slight shame that the fountains had been boarded up for the winter, but it didn’t take away at all from the sight. It was lunchtime and we love a good Czech lunch, especially during the cooler weather, as they serve hearty and homey dishes. Since the town was so empty, we were a little worried there wouldn’t be much open so we chose the first restaurant we came across, Zach Restaurant. It only had a 3 star rating, but to be honest, we found it cozy and delicious. Here’s what we ate. It was pretty amazing. I had a chicken roulade filled with spinach, blue cheese, and herbs. Jim had these amazing local specialty dumplings, filled with meat and topped with grilled onions,and of course we both had a great Czech beer. Warmed up from our food, we continued our stroll through town taking lots of photos until it was time to get back on the road and head to the 2nd largest city in Czech, Brno.

Have you been to Telč? 21 thoughts on “A Romantic Lunch in the Resplendent Telc”