I love a festival.  And one that involves food, well, that’s a no-brainer.  We were going.  I love pumpkin, and I’d heard there was plenty of pumpkin specialties to be tasted, so off we went.  In fact, September is the month of festivals in Germany, so you can find many more to attend like the world-famous Oktoberfest which happens during some of the same time.

Entering the grounds, the first thing you need to do is wait in line to buy tickets, then you walk down through the gardens, by a little pond where they were having the canoe trials and then into the gardens.  Behind the garden is really where the majority of the festival is located, but the gardens themselves are beautiful and well worth a look as you walk through.

The main reason we went this particular weekend was for the pumpkin canoe races, and after seeing it I might like to row my own canoe in the future.  What a great bucket list item.  It is rather comical to watch, but the carved out gigantic pumpkins are really quite steady and we didn’t see anyone capsize. You are encouraged to start growing your own humongous pumpkin at the end of April so that it is ready to be plucked and carved for canoeing in September, and there is one man who you can contact to find out more about giant pumpkins. You are not required to bring your own. You can use one of the ones that he has grown and shared. 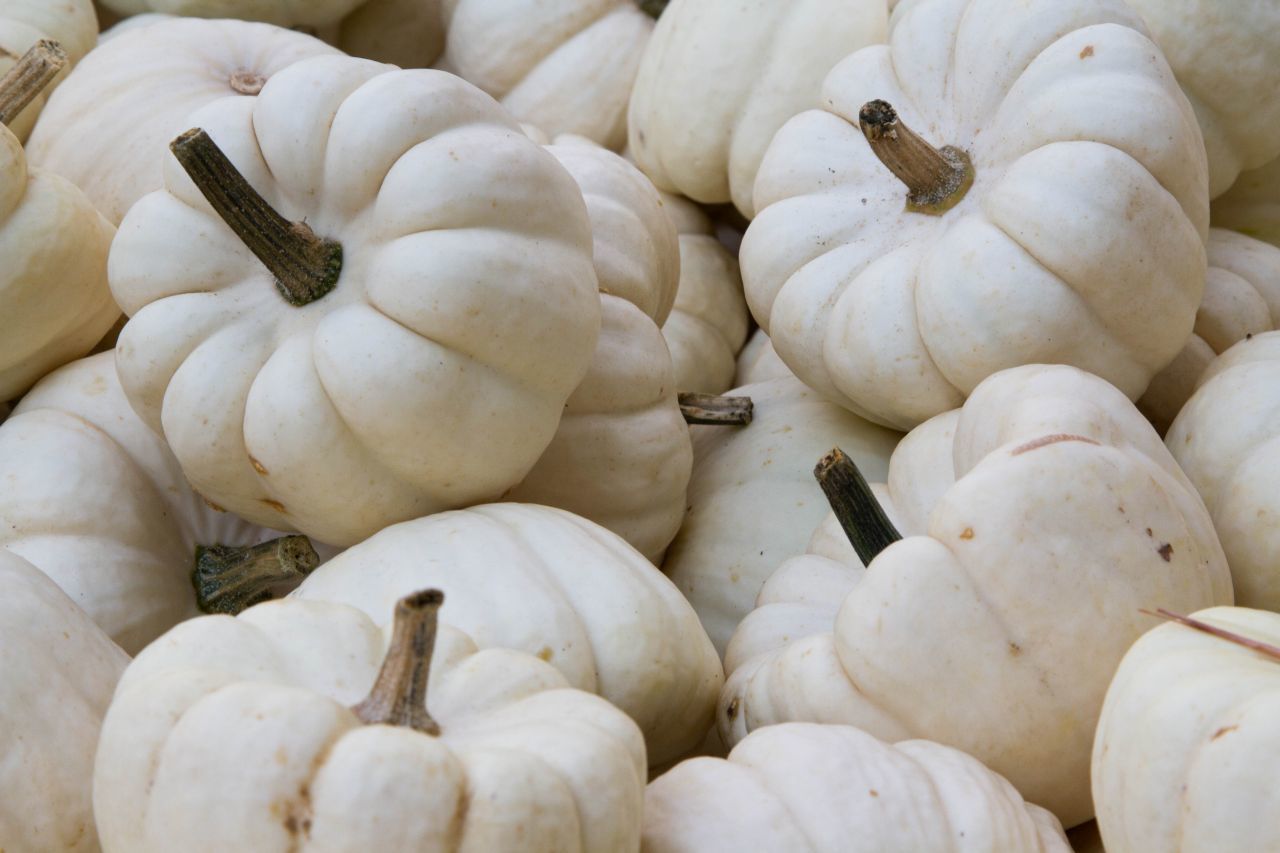 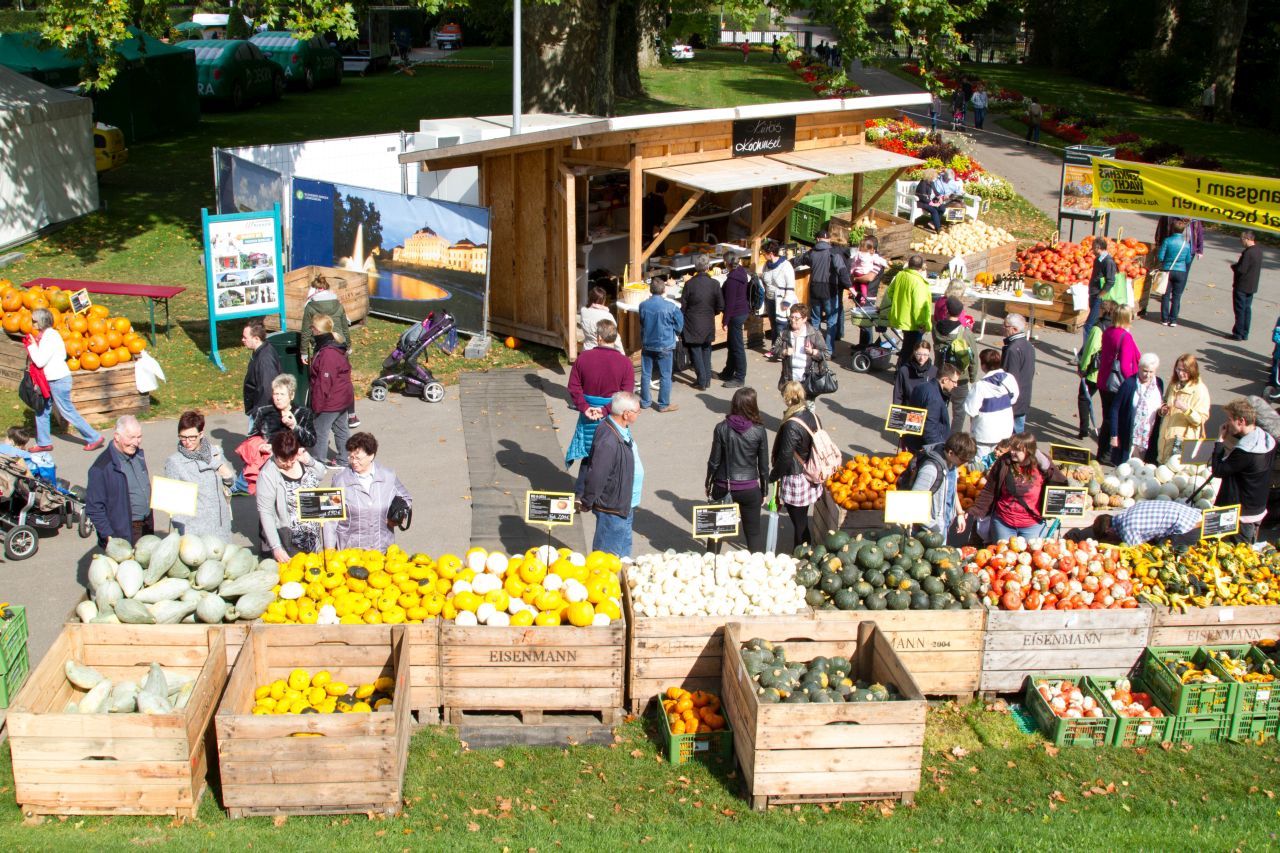 The contestants are timed, so it’s not a race against the person who is on the course with you.  I’m not sure what the final times were, but it doesn’t look like you can really go too fast.  There was a lot of splashing and when the racers got out of the pumpkin they had seeds and pumpkin strings clinging to their bottoms. After watching this for about 20 minutes, we headed around the palace building where the majority of the festival is located. One of the first installations you come to is the start of the pumpkin sculptures, one announcing the theme of the year.  In 2015 is was “Flight” and in 2016 it is “Circus.”

The sculptures are made entirely out of pumpkins, and there were as many different sculptures as there are types of pumpkins, from flying carpets, to rockets, to insects.  It was amazing what you can do with a huge metal frame and a bunch of round vegetables. 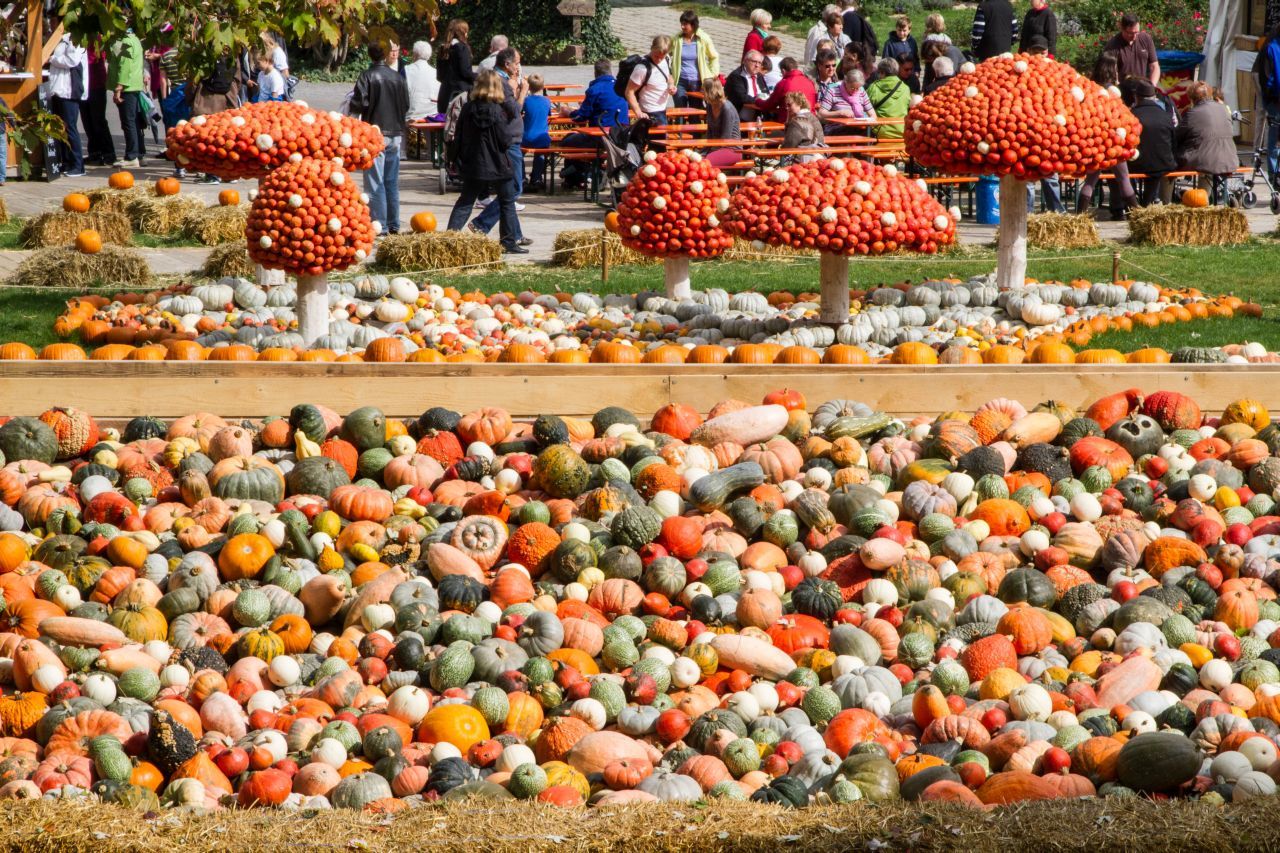 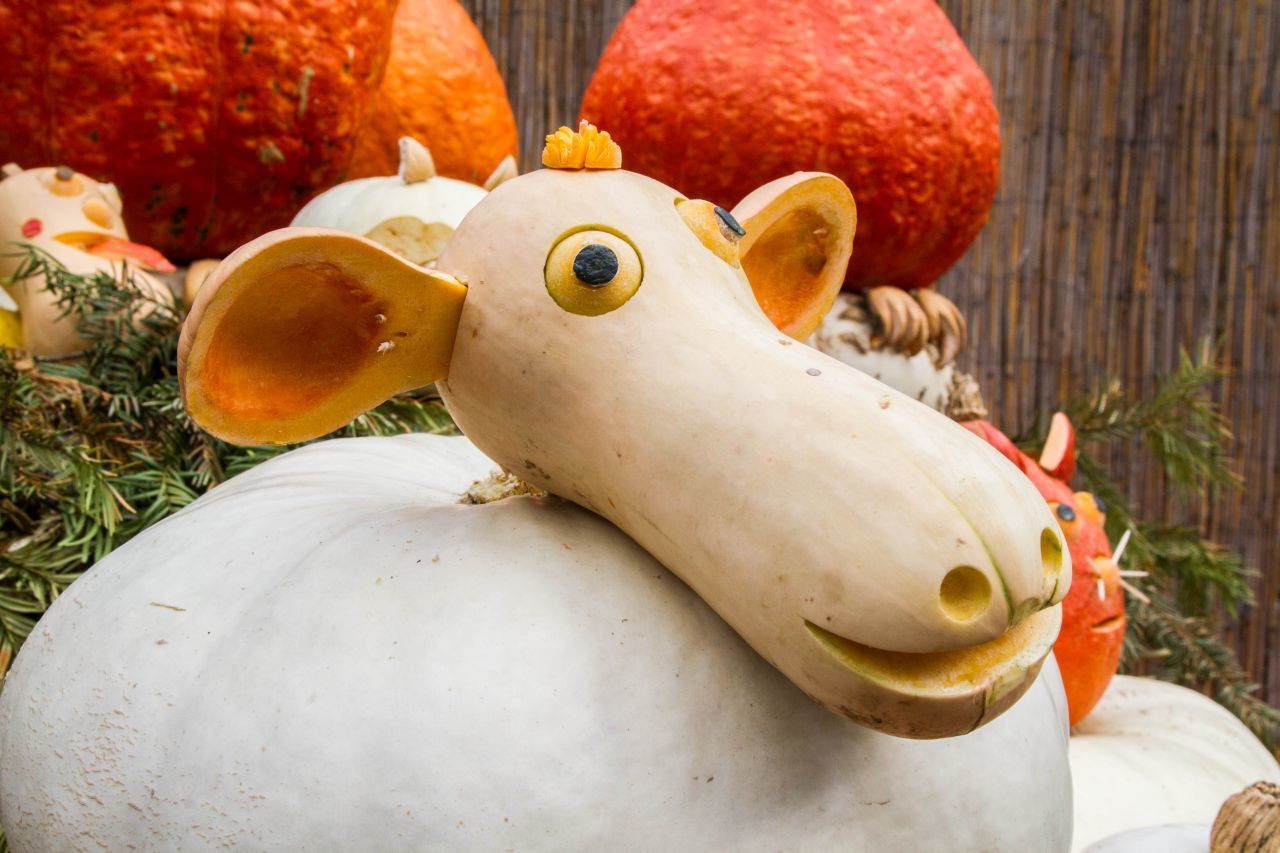 I never knew pumpkin art was such a big deal, but there is one American pumpkin carver, Ray Villafane,  who comes to the festival each year and has made a name for himself all over the world.  Ray  has developed a family of pumpkins that he calls the Hubbards.  He carves them with a huge, full of personality face, on the main part of the pumpkin and then completes his people with small arms and legs.  The Hubbard people are adorable on their own, but he also creates scenes for them which are just hilarious. Ray will be attending the festival again this year (2016) on the weekend of September 18th, so you can meet and talk with him. 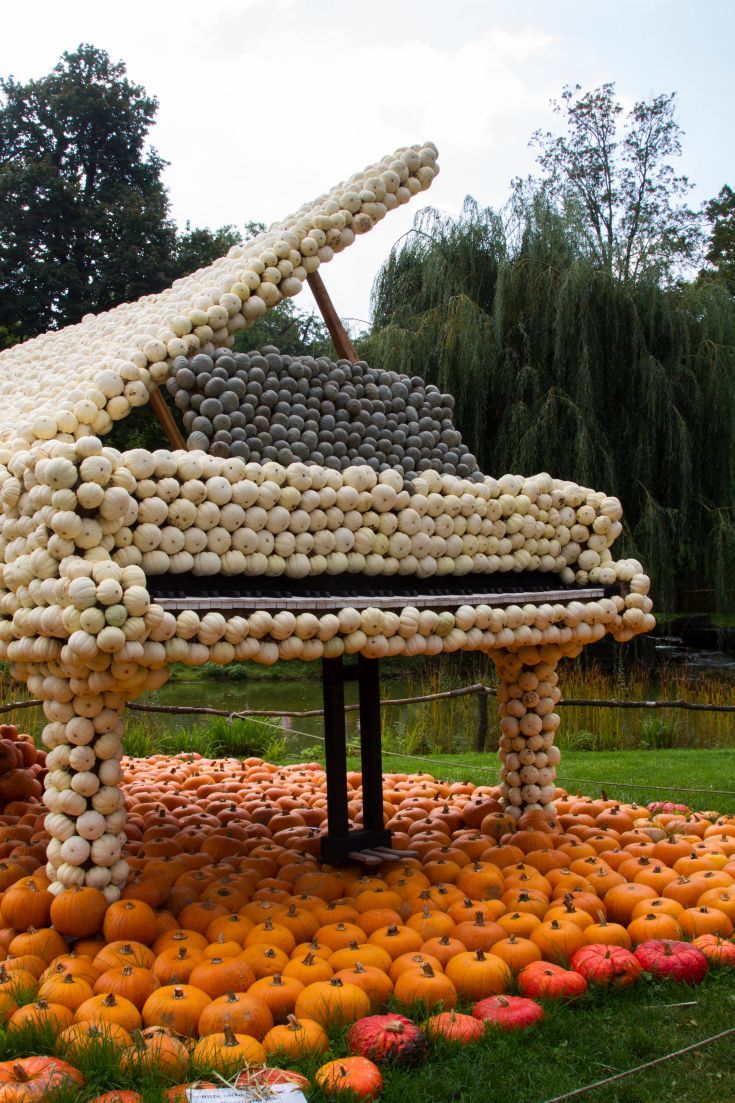 Other types of exhibits include a wall of pumpkins from around the world, all different sizes and shapes and even colors.  And there are vendors selling everything pumpkin including pumpkin spices and pumpkin wine.  My favorite, though, is the pumpkin café which sells a pretty vast variety of pumpkin dishes.  Since there were four of us, we tried everything, spaghetti, fritters, and even desserts.  Most of them were delicious!

General Info: The cost of the festival is determined by the castle, the Blühenden Barock so please check the website before you go.  It is very stroller-friendly, and the kids will really enjoy everything about the pumpkin festival.  You can also take your dog as long as he or she remains on the leash at all times.

How to get there:  Ludwigsburg is very close to the city of Stuttgart, which of course, has its own airport.  However, most people will be traveling from other larger cities.

We always recommend driving and here are some driving times if you are interested: from Stuttgart about half an hour, from Frankfurt about 2 hours, and from Munich 3-3.5 hours, Grafenwöhr about 3 hours, and Wiesbaden about 2 hours. If you drive, there is paid parking right near there.  We paid 5 Euros for the couple of hours we were there.

Ludwigsburg is easily accessible by train: from Stuttgart a mere 10 minutes, from Frankfurt 2 hours, and from Munich about three hours.  From the Hauptbahnhof (train station) to the Blühenden Barock where the festival is held, you can take bus 421 or bus 430.  They run every 15 -20 minutes and it takes about 16 minutes to get there. 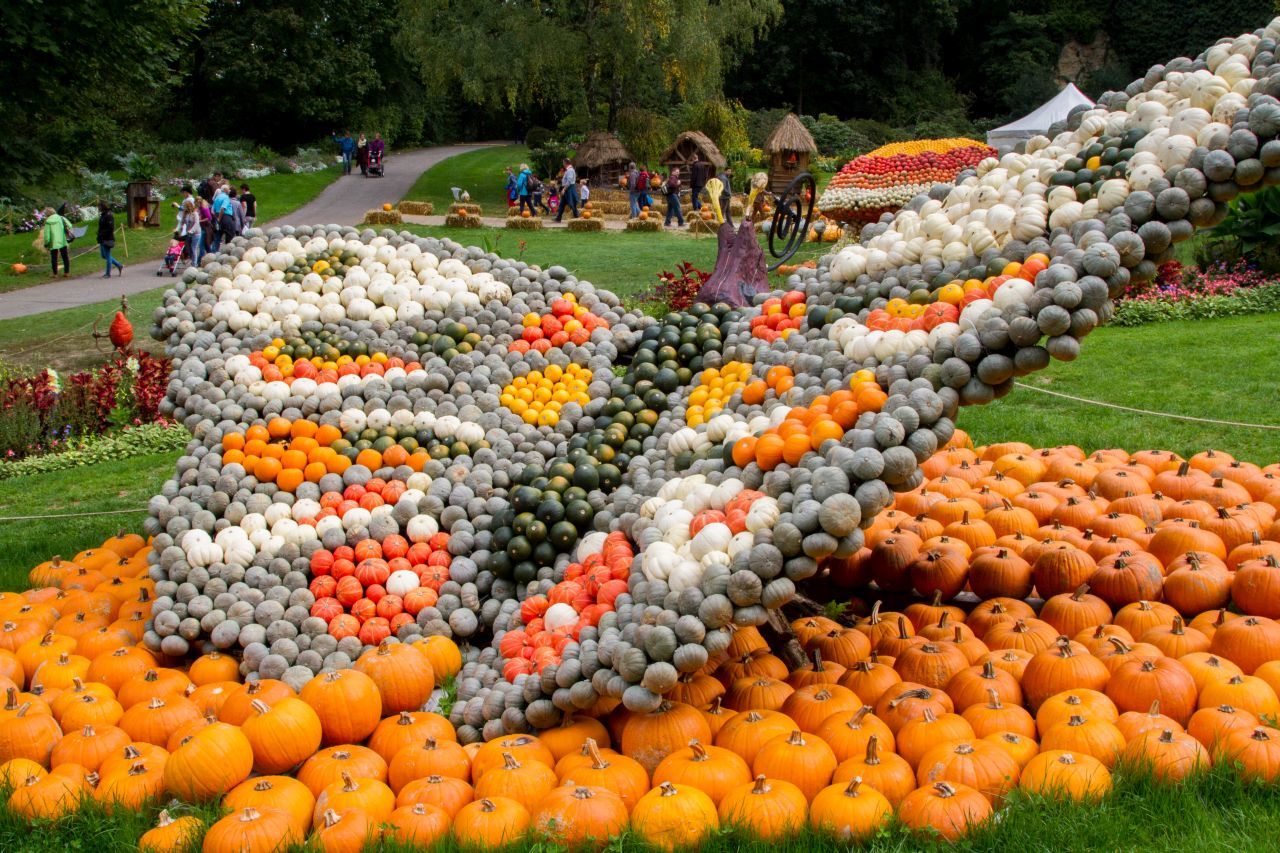 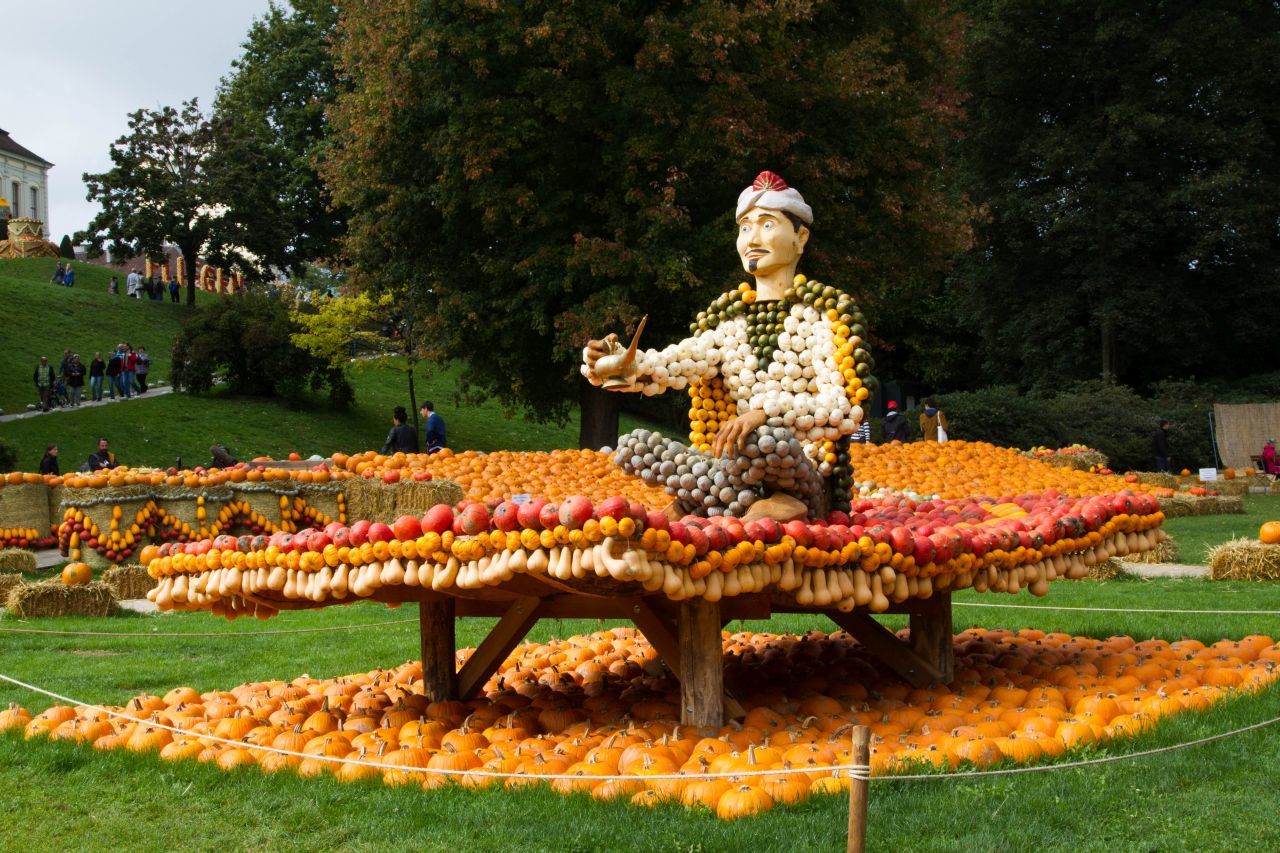 Other things to do in the area:

To find out more about the Pumpkin festival go to the their main website which has a list of activities for each weekend.

Have you ever been to a festival such as this?  Please tell us about it in the comments!

Pin the Pumpkin Festival for something you will want to include in your German Itinerary! 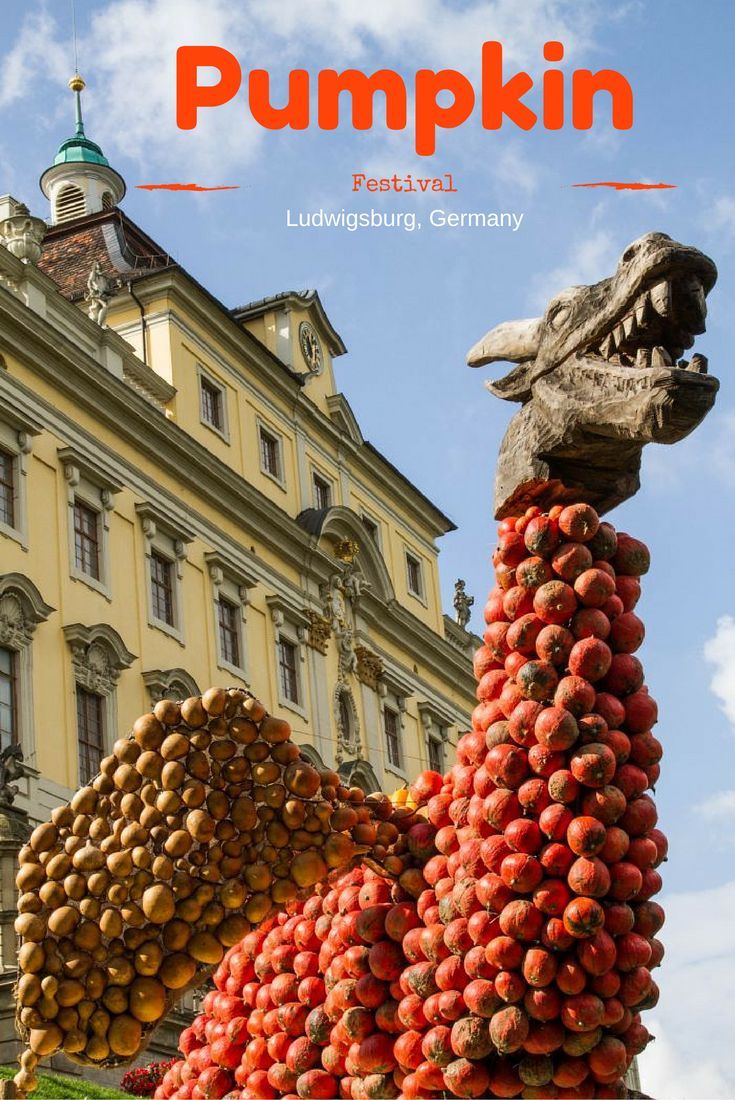 19 thoughts on “Splashing About The Ludwigsburg Pumpkin Festival, Germany”