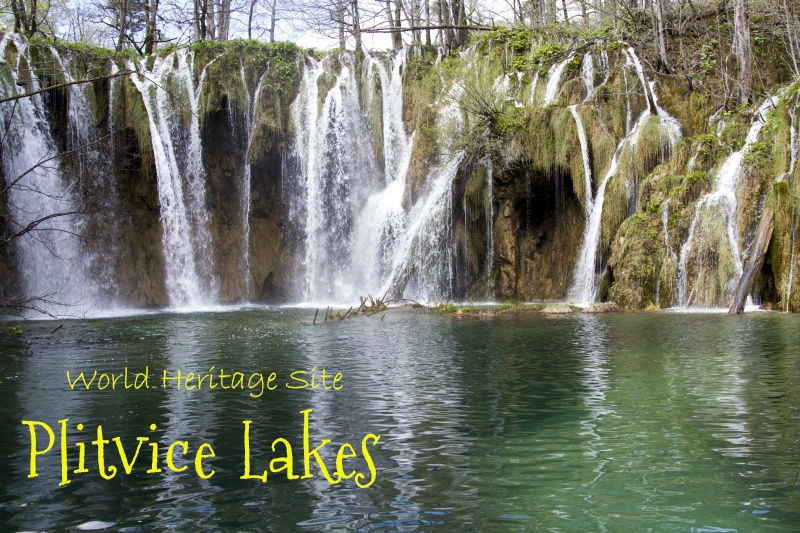 Images of emerald green lake beds one on top of the other, almost like pancakes with the syrup running down the sides beckoned me, and Plitvice Lakes became number one on my list of things to do when I went to Croatia.  Not only did the pristine and unusual natural phenomenon call my name, but the park also marks the spot where the first shots were fired in the Croatian War of Independence.  That doesn’t happen in my national parks where I come from.

Driving into the area, there really isn’t much of a town to speak of, but there was plenty of accommodation, so we figured we find a place to sleep, and get an early go in the morning.  This turned out to be one of our smarter moves. 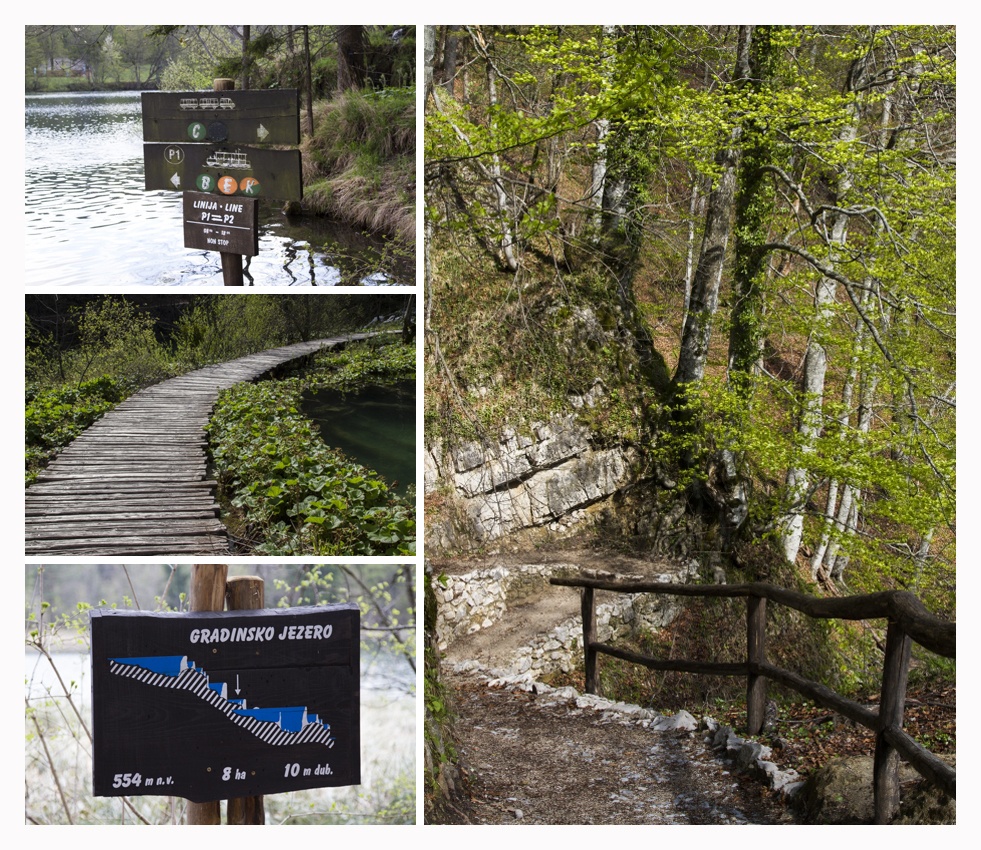 We arrived at the park at 8:30 and hiked down to where the shuttle bus would pick us up.  We were so early and still very chilly that no one was on the bus except park workers.    We decided to follow the D/E path, and when we saw our sign, we hopped off and started hiking.  It began at the top of the layers of the limestone and chalk travertines and the path led us down, down, down. 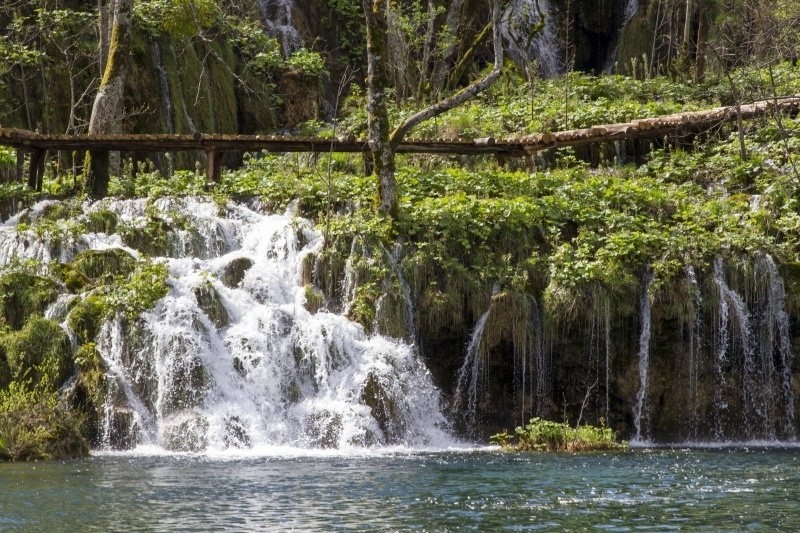 This path is supposed to take 2-3 hours.  I think it took us four with all our stops and photo-taking.  For the first few hours, the only other person we saw was a lone Japanese tourist, and we only saw her once.  Being early spring, the green was just starting to pop, and we could easily see through the brush.  The top waterfalls all seemed a bit of a distance away, but as we descended they got closer and closer to the path.  In fact, there were parts of the path where the water was rushing underneath or right beside us.  It was easy to look down and see the fish.  We also saw ducks and a few other birds, but that was about it on the trails.  I’m sure you have to go much deeper in to find the other wildlife. 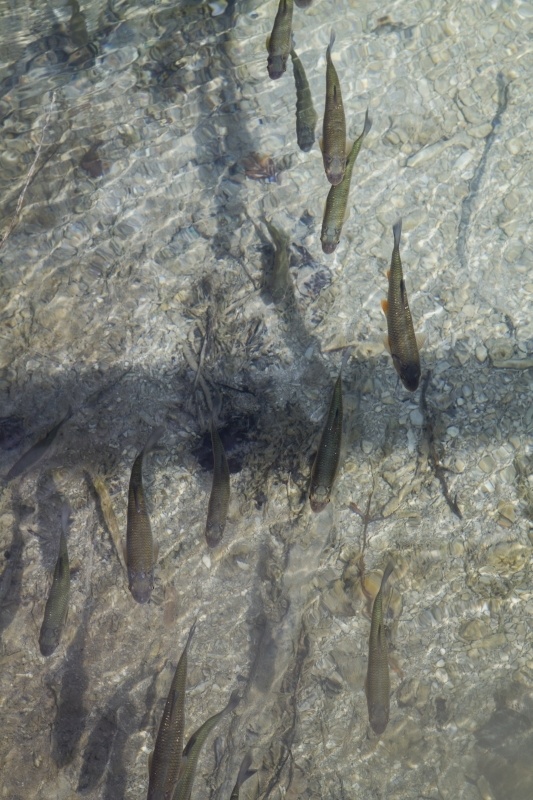 Most of the trail there was a wooden walkway through or over the lakes, but there were parts that were just dirt, or in our case, mud.  There was a point that we think the sign said don’t go any further, but we disregarded it and subsequently got some wet feet.  Oh well. It didn’t dampen our spirits, though, since the views were spectacular, and just when we thought it couldn’t get any prettier, it did. 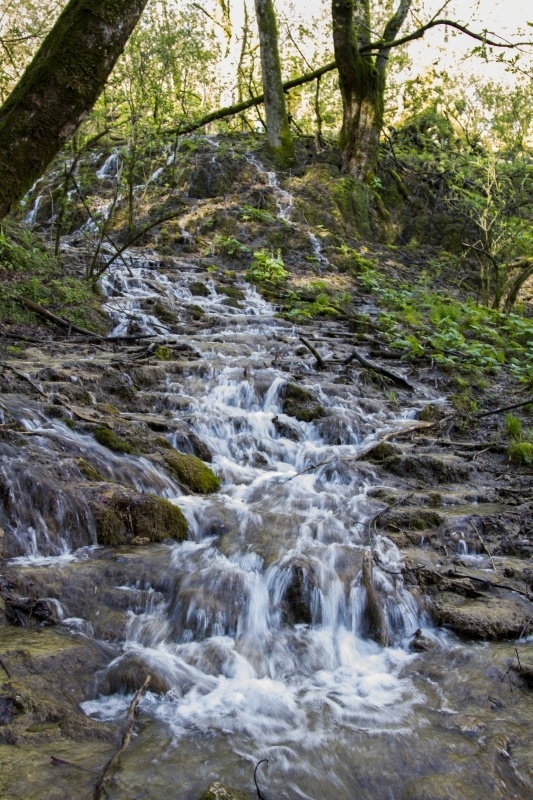 We didn’t encounter any tourist groups until we were almost to the boat dock.  First there was a Korean group in their high heels and huge sun hats, then a Japanese group was soon behind.  Unfortunately the wooden path is only a few feet wide, and as I said the water is directly underneath, so it felt a little crowded as soon as the tourists began congregating on the walkway.  They weren’t hiking much, just taking a quick look at some of the closer waterfalls, and they were on their way.

There weren’t too many children on the paths this early, but if you are looking for tips for doing Plitvice with kids, look no further. 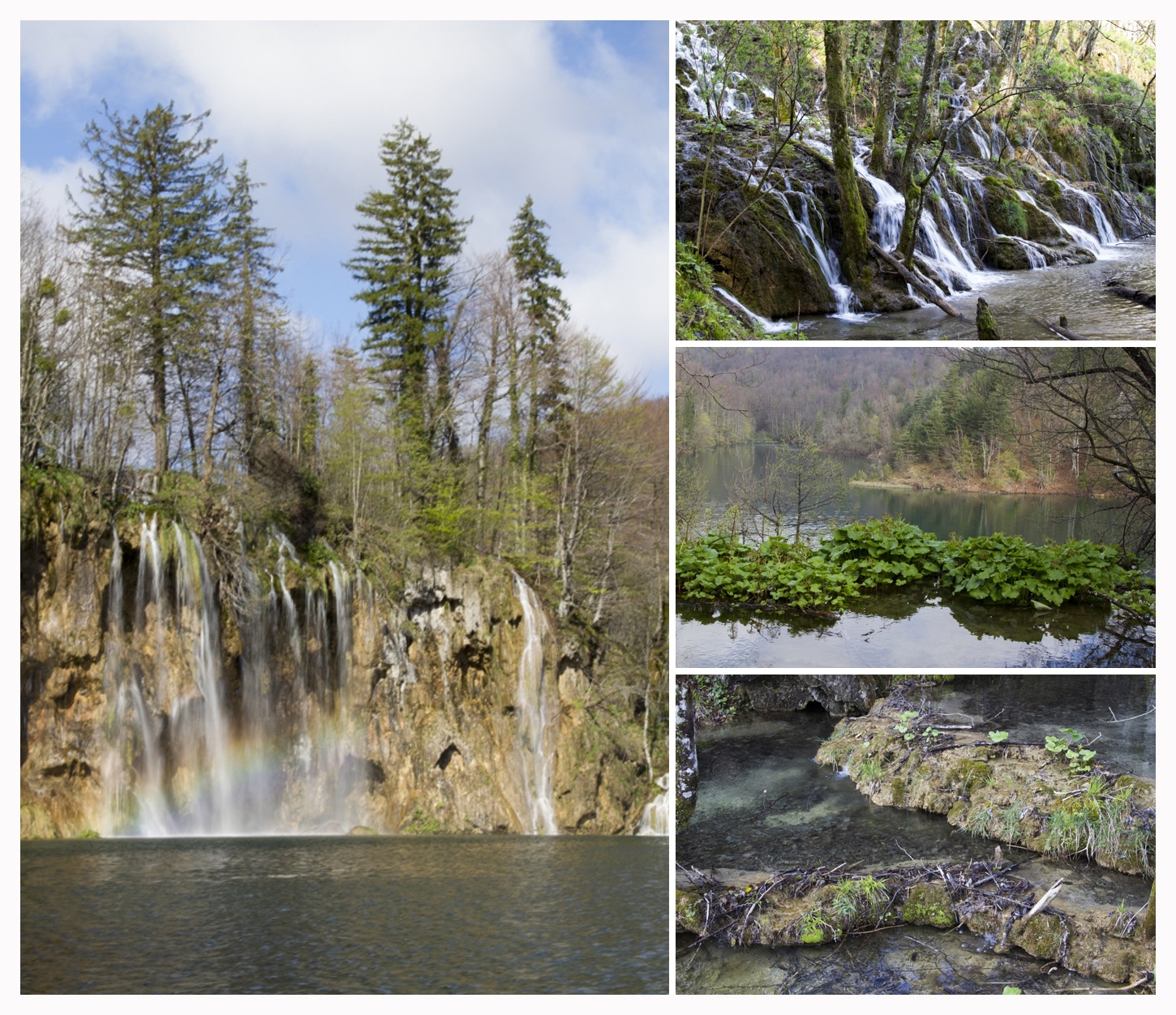 We wanted to take a boat so headed down to the boat dock where we had two choices, one took us directly across, maybe a 5 minute ride where we could take the shuttle back to the entrance of the park, and one took us across the lake on about a 25 minute ride.  We chose this, knowing that we would have about a 40 minute hike back up to the shuttle bus pick up.  It was pretty cold on the boat, and it didn’t take us near any waterfalls, so I have to admit I was a little disillusioned with it. 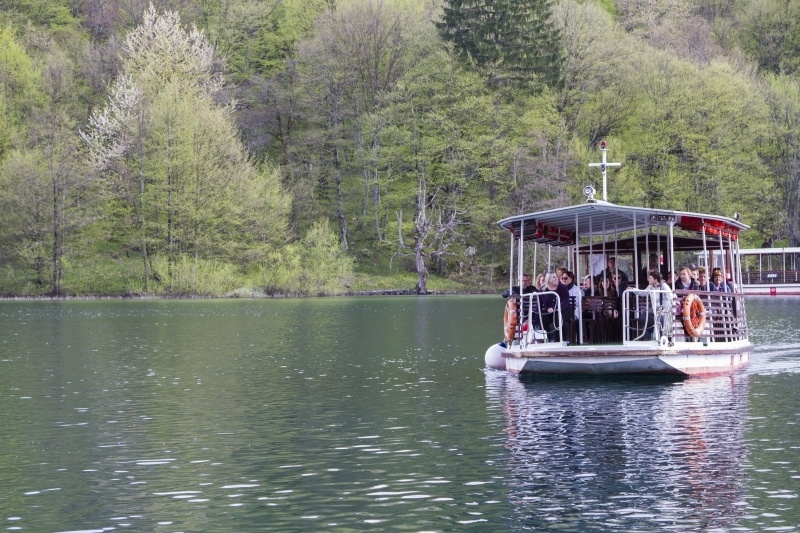 Plitvice National Park is one of the most visited tourist sites in the country, so there are many tours you can take for a day trip from places such as Zadar, Split, or Zagreb.  What we did was rent a car and drove ourselves there, which like I said gave us the advantage of getting to the park right when it opened and no one else was around.

Cost:  Look here for up to date info on pricing.

Shuttle Buses: The bus/trolley system takes you to all parts of the park, and the price is included in your park ticket.  It runs every 15 – 20 minutes, so you never have to wait long.

Services: The park is well-maintained.  We saw men working on the wooden planks and shoring up some of the areas that were flooded.  The toilets were located at all the bus stops, the main boat dock, and the park entrance.  They had running water, toilet paper, and were extremely clean.  There were also snack stops and souvenir stands in the same areas.  As you hike, though, there is nothing, so bring water and carry out your trash.

Word of Warning: There may be parts of the park where it is accessible to strollers and wheelchairs, but I really didn’t see much.  The wooden walkway was very deceptive.  The lakes are stacked one on top of the other, so you are hiking up and down all day long.  Here is a photo of what the wooden walkway looks like straight down.  You can’t see that it is stepped, but it is.  I took the second picture of the exact same spot from down low.  Even as you are walking, it’s hard to see.  I stumbled a number of times. 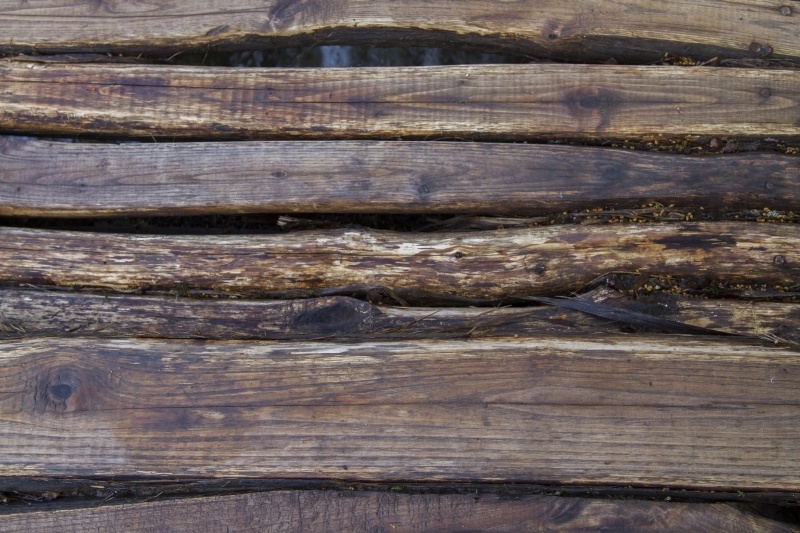 Accommodation: As we drove to towards the park entrance, there were plenty of B&B or family-run guest houses.  Some included food and some didn’t.  We saw no restaurants at all, except for the one at the park hotel, so we made sure we chose one that offered food.  We were very lucky that our host was a retired chef.  He verbally told us what he could make, stressing the fresh trout option.  He had a friend not too far away with a trout pond, so we had freshly cooked trout for dinner.  It was delicious.  I would recommend the Plitvice House Pox (doesn’t have its own website that I can tell). The rooms were spacious and comfortable with AC and hot water.  We went a little off-season, so we were able to get rooms without reservations, but I would suggest having reservations if you go later in the year. 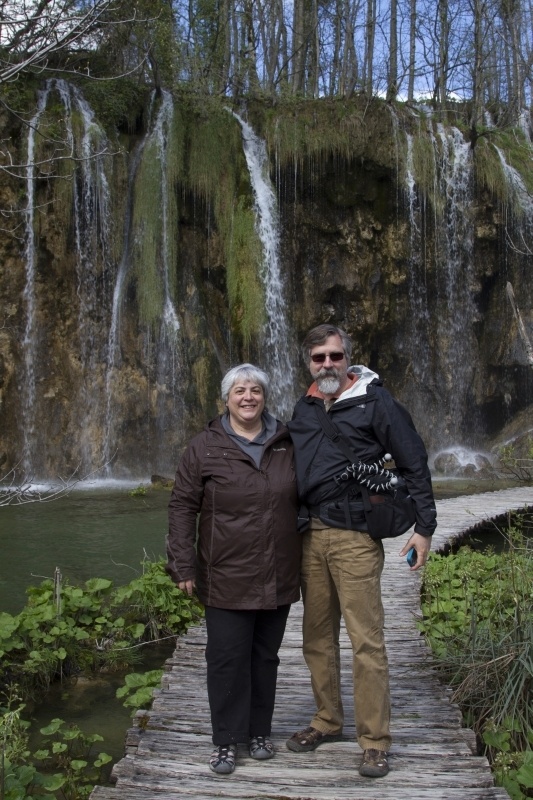 Have you been to Plitvice Lakes?  Which hiking path did you take?  Do you have any other recommendations for visiting?