One of the main reasons we wanted to visit Tunisia is to see the many Roman ruins that still exist, especially in Africa. We were amazed that the Romans spent so much time in this North African country, and really the only way to see them is by doing a road trip.

The Roman Ruins of Tunisia That We Visited 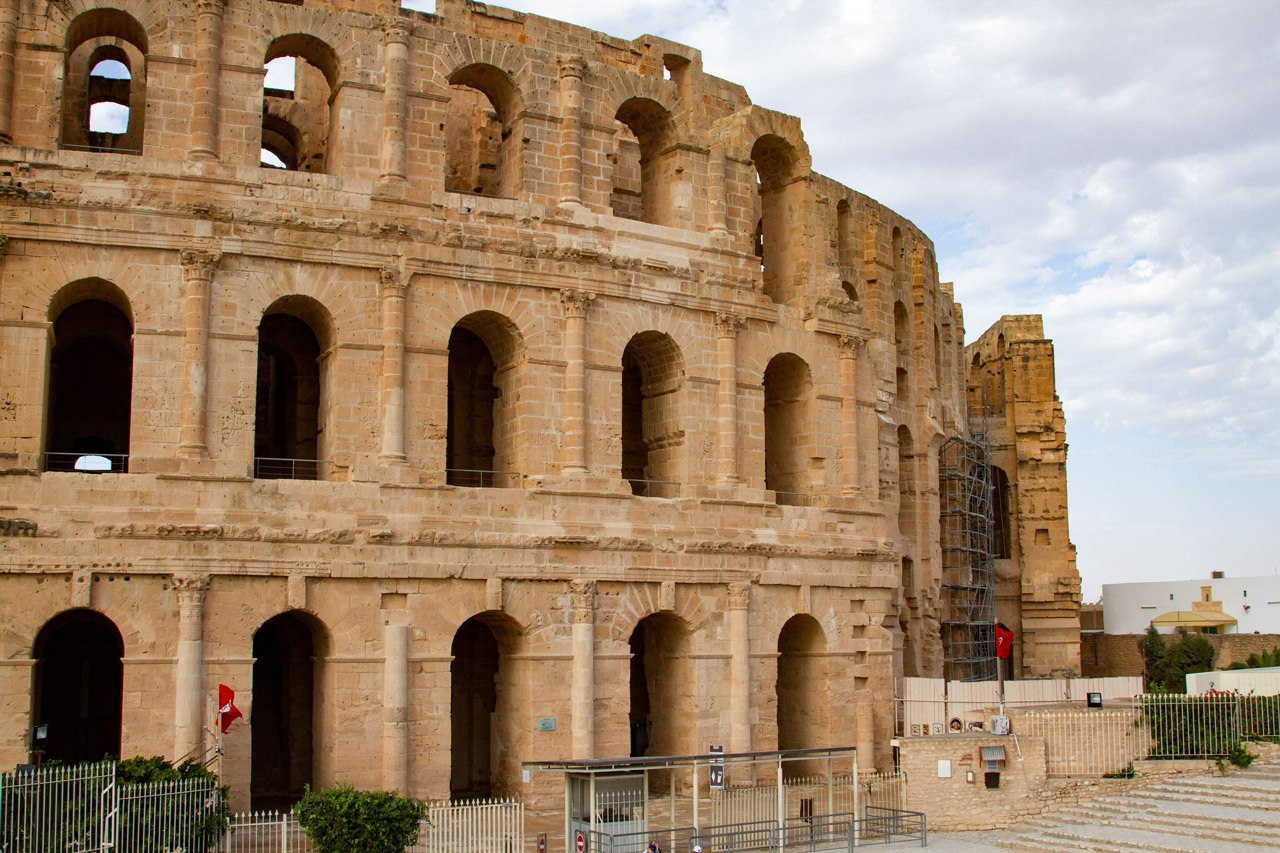 After seeing El Jem on the Amazing Race, it was on the top of my list when motoring through Tunisia. We arrived on a gorgeous day. El Jem was inscribed in the UNESCO World Heritage List in 1992 because of its unique architecture. Considered the largest amphitheater in Africa, it is also the only one that is not built into a hillside; it’s freestanding, much like the one in Rome. It was built sometime around 238 AD, and can hold a staggering 35,000 spectators. 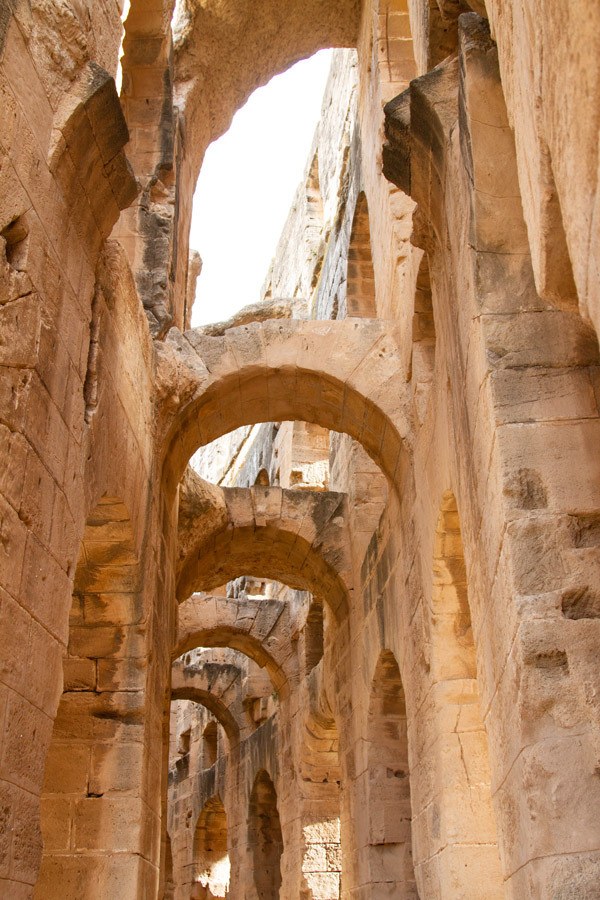 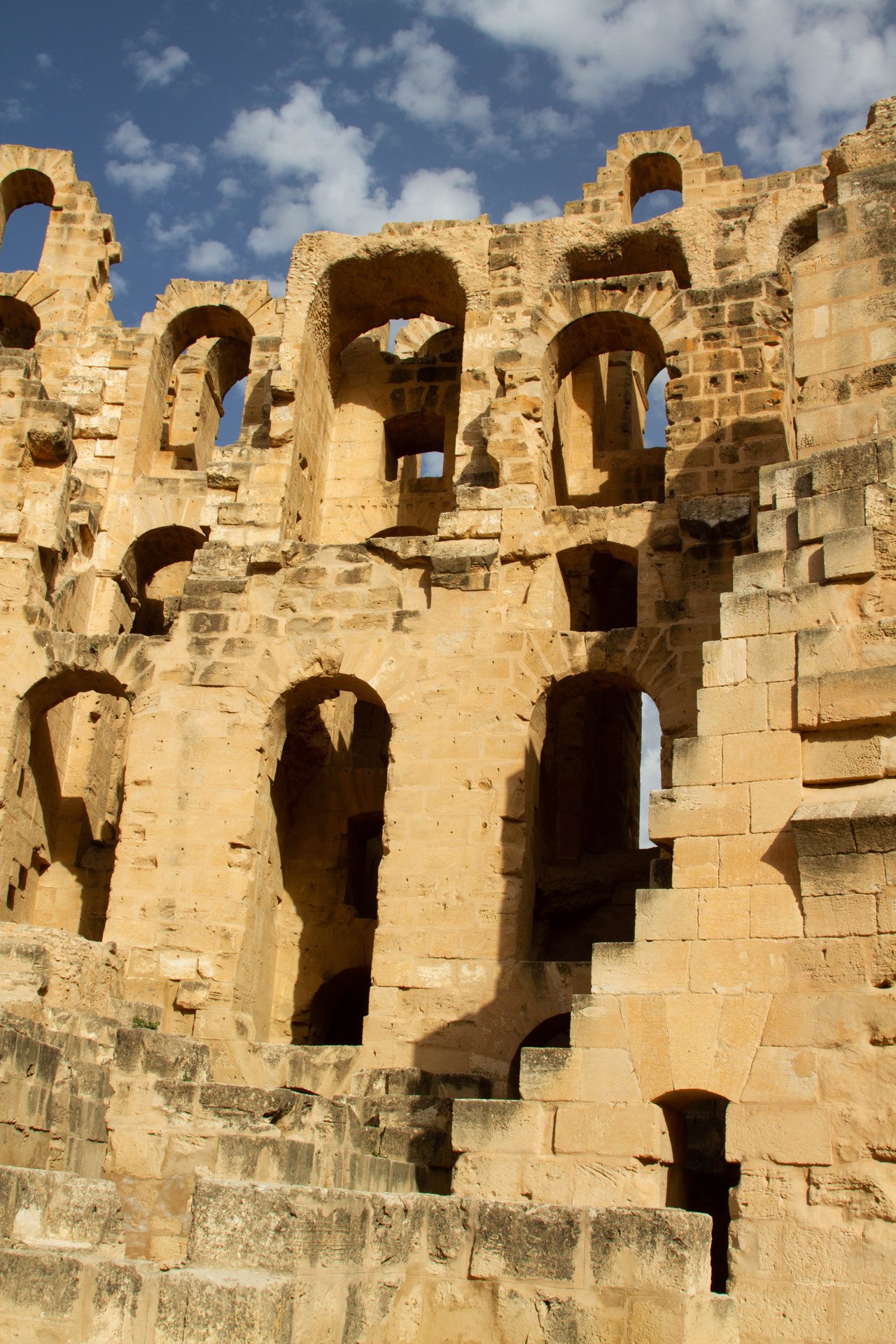 This is one of the most popular sights in Tunisia, but like most of the other places we’d visited there were only a handful of people there. In fact, other than a couple of solo travelers and the workers, we had the entire place to ourselves. Unlike the Coliseum in Rome, you can really wander and climb around the majority of this site. There were plenty of passageways to explore complete with ancient graffiti.  You know we are just big kids at heart, adn we couldn’t help but pretending to be gladiators. Who do you think was the victor? 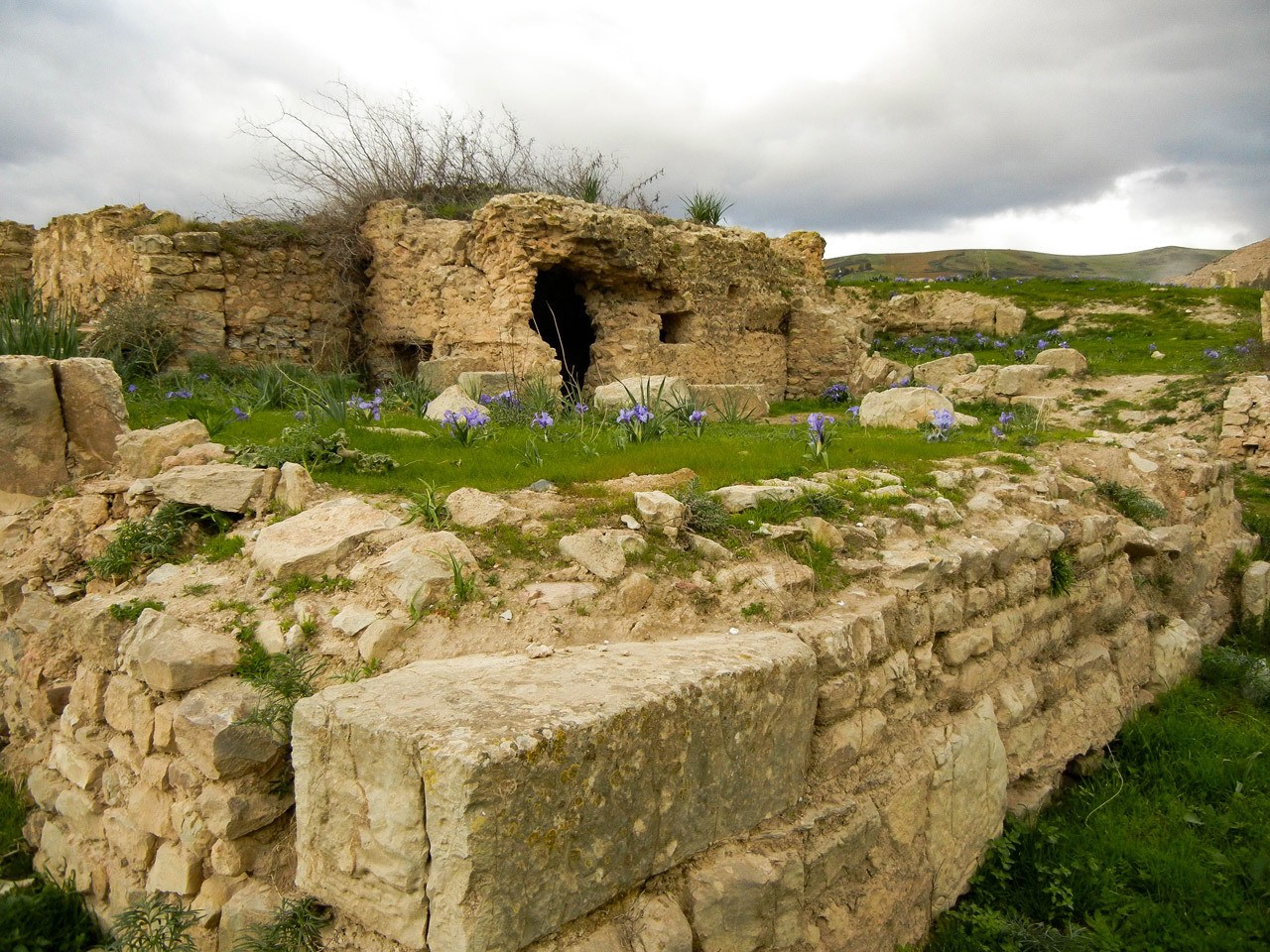 Driving from El Kef to Tunis, we really were excited to stop off at Bulla Regia, a World Heritage Site near Jendouba and just under an hour driving time from El Kef. Of course, we couldn’t resist a stop at an olive oil press along the way, so that 50 minutes turned in to nearly two hours. But that’s exactly why we like to rent and drive ourselves when we travel. It really opens up more possibilities and allows for flexibility. 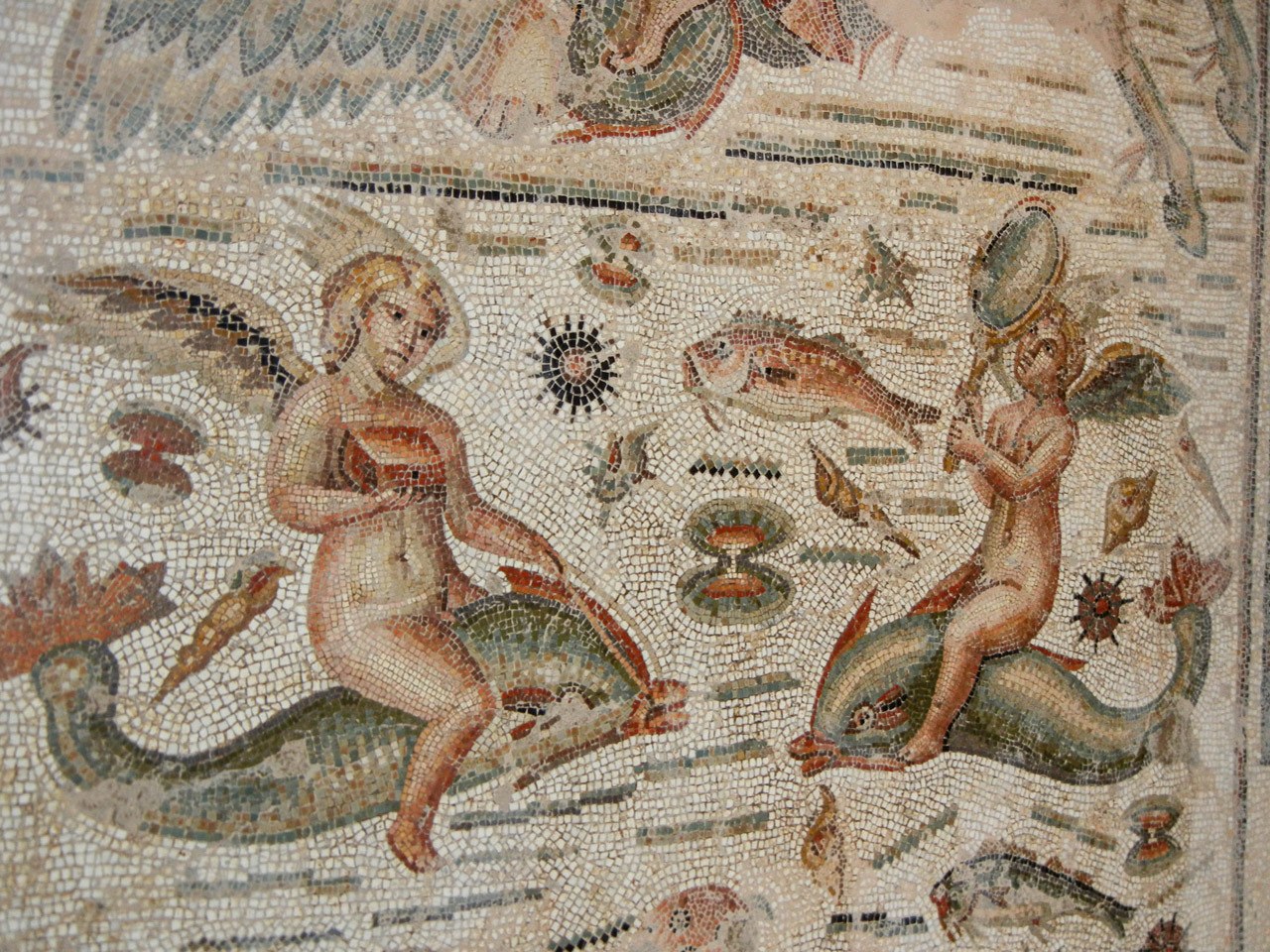 We had already been to the Bardo Museum in Tunis and seen the amazing mosaics that had been removed from Bulla Regia (among other sites). The collection was better than any other mosaic collection I’ve seen. So it was a natural choice to see the site, explore the ruins, and experience the mosaics still in situ. 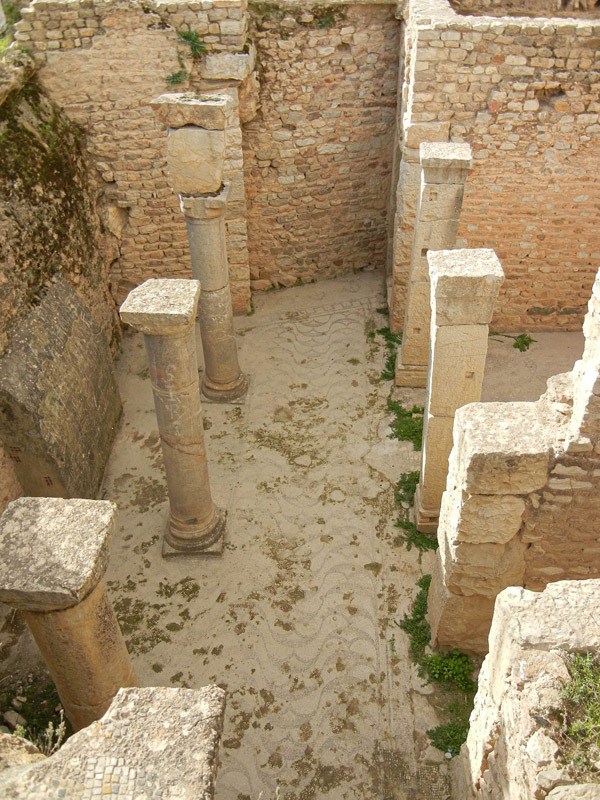 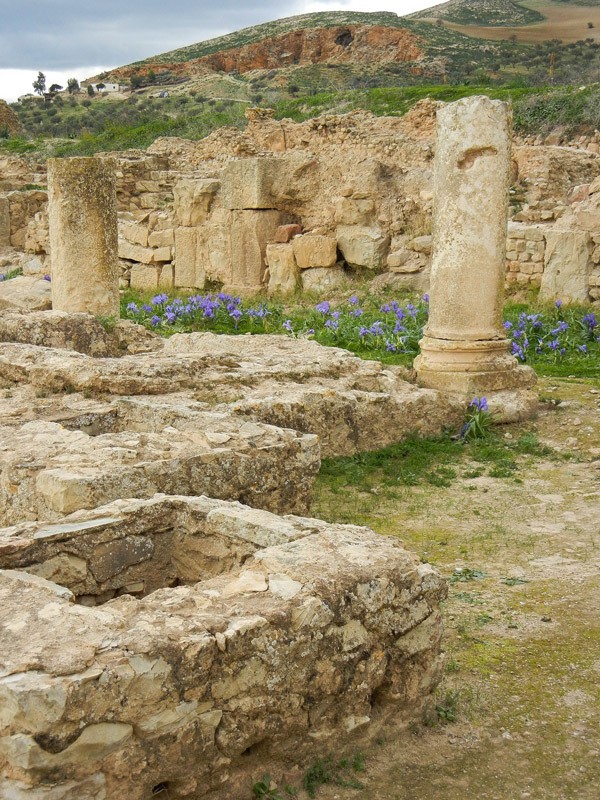 Luckily for us, it had bee raining the day before. Everything looked cleaned and rain-washed. The flowers were popping out and the grass was shining green in the sunny breaks. There were a few families wandering around what seemed to be a large field of rubble mounds and bramble. One or two trails were laid out but with very few signs to guide the way. We’re usually very leery about touts offering their “guide” services, but we quickly realized we were unlikely to find anything on our own. When we spied one of the families heading for the exit with a young twenty-something guide, we quickly walked over and “let” him offer his services. Yousseff claimed to be a university student on break and seemed to be friendly and knowledgeable so off we went to explore the rubble hills of Bulla Regia. 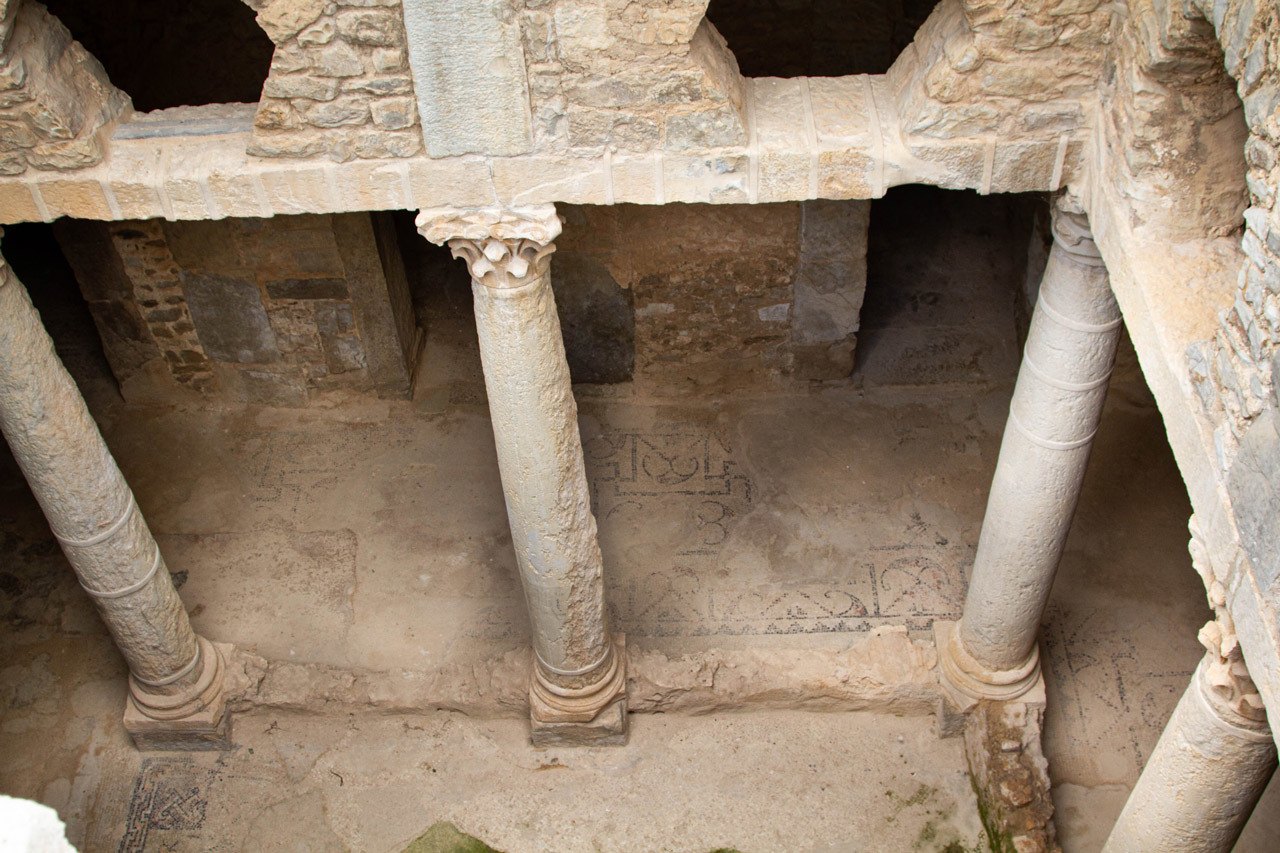 Yousseff led us around to the various underground chambers, explaining the history of the site along the way. Berbers, Carthaginians, Romans, they had all been part of the long history. At some point they discovered that building underground provided protection from the scorching summer days.  Armed with a water bottle to sprinkle on the mosaics, Yousseff treated us to a vision of what the mosaics may have looked like long ago. 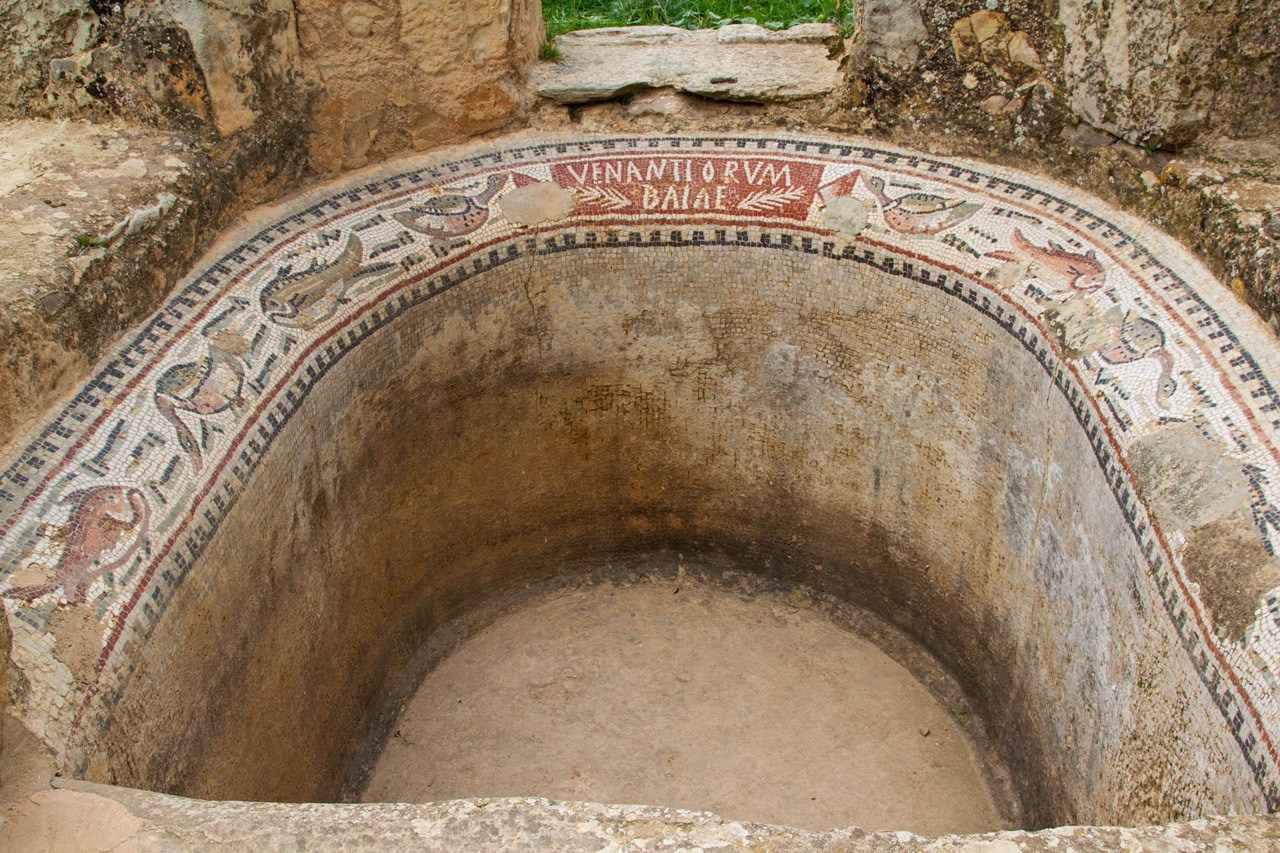 Bulla Regia is easily accessible as a day trip out of Tunis or as a stop on the road from El Kef as we did. There are some facilities on site to include a small museum, a cafe, and clean bathrooms. Other than that, this is farm land so don’t expect much else. 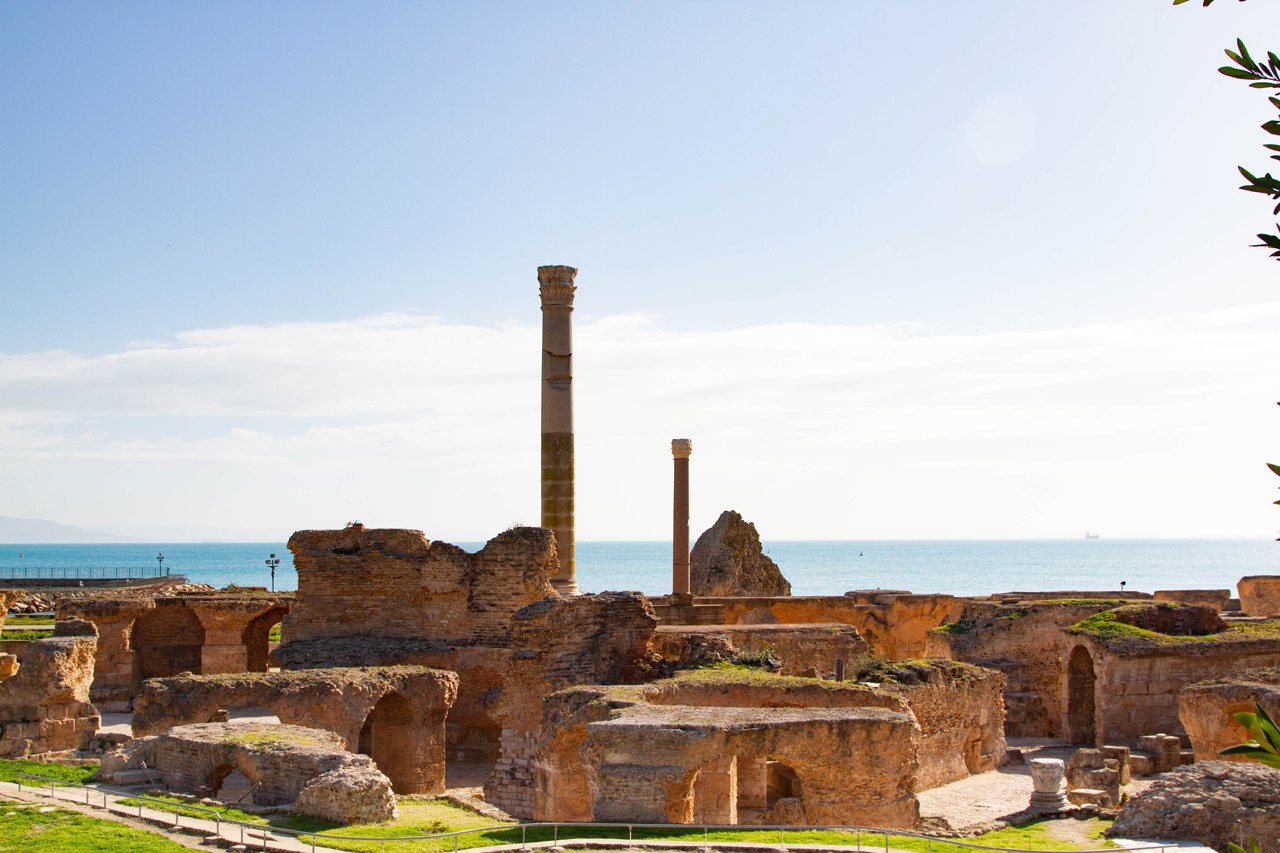 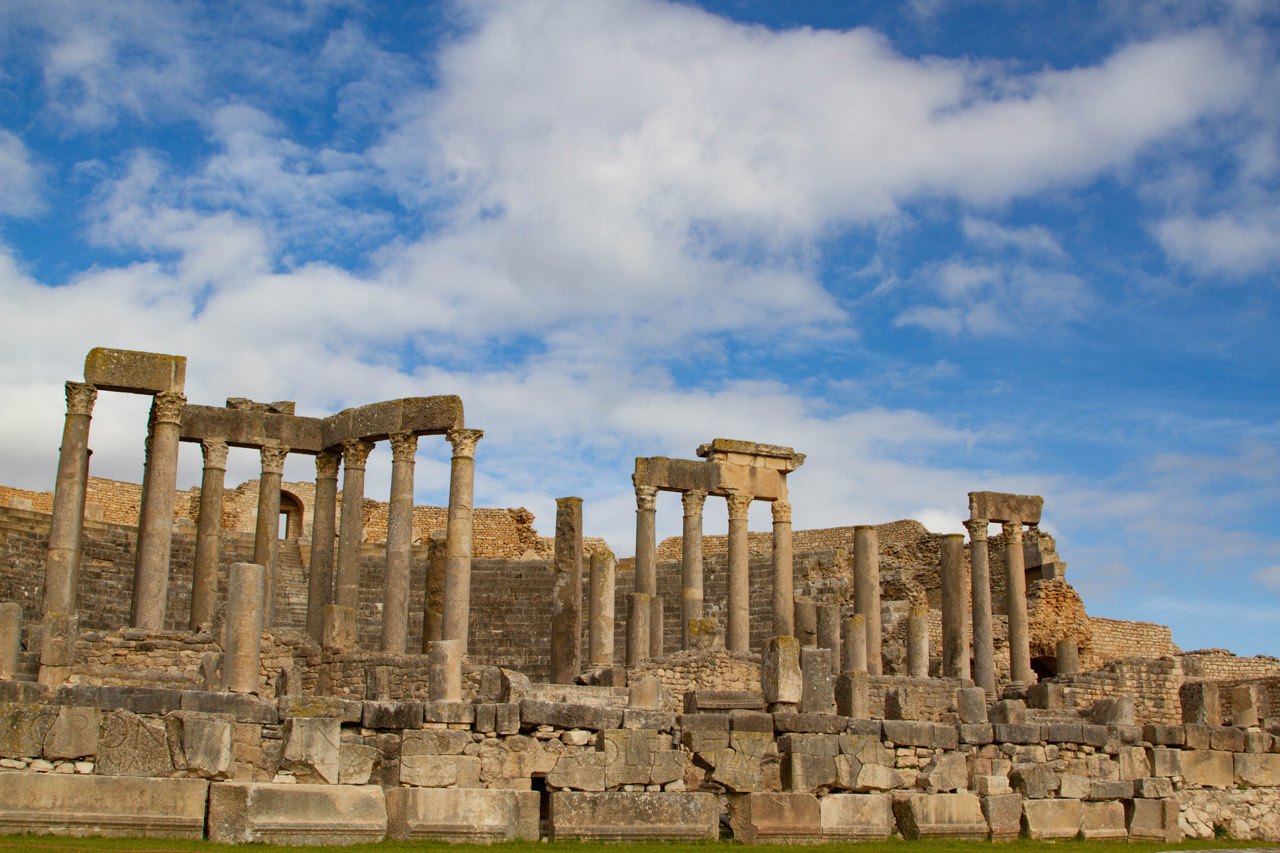 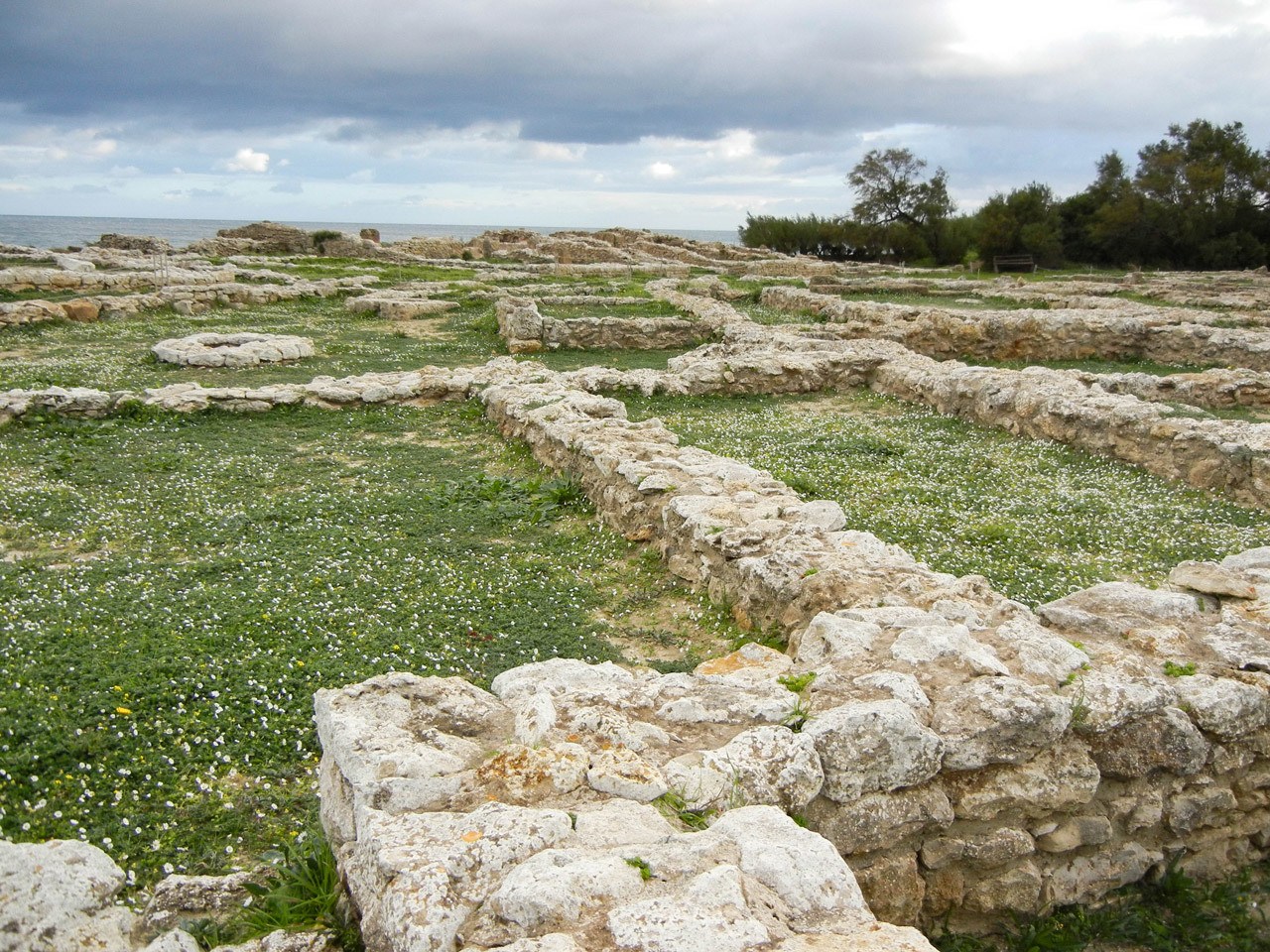 I’ve always read about how the bath was central to Roman culture and society and am amazed at the engineering and architecture of a Roman bath. You can find them in practically every Roman site from the largest cities to the smallest hamlets. So when we found out that one of the things you can experience in Tunisia is an ancient, but still functioning, Roman bath, I just knew we had to go. We had traveled to the farthest reaches of the Tunisian frontier, to the border Kasbah city of of Le Kef. Now we were heading for the ancient Roman bath, Hammam Mellegue on the banks of the Oued Kseub river, west of town. As with other lesser known destinations in Tunisia, the map was not much more help than giving an idea of where our destination was located. After a little trial and error, and one or two wrong turns, we were soon meandering down a peaceful valley in the direction I was sure would eventually lead us to the baths.

Our little rental car had no problems circumnavigating the few deeper potholes and overall the road was quite pleasant. We eventually came across a lonely farmhouse overlooking a winding stretch of river with old stone ruins across the field. This must be the place! The farmer and his family were working out in the garden and looked up briefly to give us a wave and a smile as if seeing a car load of American tourists out here in the middle of the Tunisian Tell Atlas range is completely normal. To be fair, it probably happened often enough; there was a camper van from France parked alongside the road nearby.

We pulled the car off the road near to the ruins and got out for a closer look. This was indeed the baths and there was a small room built onto the ruins with an open door and a sign written in Arabic that seemed to indicate they were open for business. Looking at it from the outside it was hard to imagine that somewhere in this pile of rocks and ruins there could be a bath let alone two. In fact, there are both a men’s and a women’s pool with separate entrances. We split up along gender lines and entered the dark and steamy changing room. There was no electricity when we visited so the only light was coming from a tiny window slit high up on the rough stone wall. It was enough to find a small plastic stool and a hook on the wall so I was soon heading, towel in hand, deeper into the recesses of the cave like interior. The bath was down a short, dark, crumbling tunnel and I found myself wishing I had brought shower shoes or sandals to navigate around and over the sharp pebbles and sticky mud.

The bath itself was a rough pool carved out of the bedrock with stone walls extending up to an arched and vaulted ceiling. Again, the only light came from far overhead through the small slits above. Shafts of light penetrated the clouds of steam lighting the room in an eerie, foggy glow. The water was hot with a heavy iron smell, and, despite the darkness, I could make out one other bather already soaking in the water ahead of us.

The one bather was an Arabic woman, most likely in her late fifties. She spoke no English, and of course we spoke no Arabic so we did a lot of smiling at each other. She must have been amazed to see three western women enter the bath. Who would think that we would seek out such an out of the way place to take in a 2000 year old spa?

With the lack of electricity, it was quite dark, but we were able to see the water. It wasn’t very deep, a couple of feet, but the woman was somehow manipulating the flow. So we had very little water at first, and then it did get a little deeper.

Unlike a Japanese onsen experience where you thoroughly clean yourself prior to entering the bath. There were no such facilities. The bath was it. It probably measured about nine feet by twelve feet, and could have held at least twenty people. We three had plenty of room.

Below is Jim’s Description of the Men’s Experience

We aptly nicknamed him “the snorkeller” as he liked to lie face down in the water and force bubbles out of his nose and mouth.

Luckily, the snorkeller soon tired of his activities and left the bath to us. We found the floor drain and the head of the spring with it’s rushing hot water pouring into the pool out of a lion’s mouth. I would have liked to have had more water in the pool, as it was only two feet deep and had plenty of room for more. But I think they had recently drained the bath for cleaning and it was slowly refilling.  It was relaxing, stretching out and soaking in the mineral rich, steamy water. I don’t suffer from arthritis or anything but I’m sure the hot waters have been a relief for those who have visited the bath over the past several hundred years seeking the healing powers of this rustic Roman bath.