When I think of Austria, I think of the Alps…and let’s face it, I picture young women and children singing and dancing on top of them. I think of little towns nestled into the countryside like in Hallstatt, or burrowing deep in the mountains to mine for salt, like in Hallein. I remember my drive through the Austrian Alps on the Grossglockner High Alpine Road and its stunning views. However, as much as I love the Austrian Alps, I’ve had a little harder time falling in love with the rest of the country. After having traveled to Vienna a few times where we did everything from art museums to palaces, I just didn’t feel it. That is until recently. I just came back from doing a couple of trips to Austria to visit some of the lesser known cities and drive down the Wachau Valley. It won me over. Upper Austria, and the cities and towns along the Danube River are beautiful with plenty of sights to see and things to do.  We spent a weekend in this gorgeous city, and I would recommend that 2 days in Linz be the minimum you would plan. Here are all the things to do in Linz.

Even though I’d never been to the city of Linz before, I decided to take a small group with me and we all headed there with the intent of learning about the city, eating some good Austrian food, and just enjoying ourselves as we meandered through the town center. We were enamored with the pastel, baroque architecture in the center, but we were also awed by the more contmporaary, art deco and modern architecture sprinkled throughout as well. It was fascinating to find so many styles. So there is the first reason to go to Linz…to gawk at the beautiful and varied buildings. The Linz Castle and the Schlossmuseum, The Ars Electronica Center, the Linz port area and Mural Harbor are just a few more Linz attractions that you will not want to miss.

The Linz Castle and Schlossmuseum

We planned just to spend a couple of days in this city known for its industry and science. In fact, we started off visiting the castle grounds, high above the main part of the town. The old walls and gates are intact, but the castle itself has been converted into an exemplary museum. While we waited for our entire group to arrive, some walking, some driving, we wandered around the very small courtyard, took another look at the walls and gates, and took in the spectacular Linz views.

If you are not a museum person, that’s too bad, because the Schlossmuseum really has something for everyone. I have to say it’s one of the best museums I’ve visited in some time. It chronicles all the scientific and industrial breakthroughs that are attributed to the Austrians. We saw examples of everything from electricity machines to tractors. Then there was an entire section that include the folk history of the area with full rooms recreated with historical artifacts. One room was a kitchen of a farm house and one of the items that caught my eye was a “banger” or “knocker” that the mother would use to get the rest of the family out of bed.

Another exhibit which I found fascinating was the nature floor where there were many live and stuffed animals, fish, birds, and even insects. The displays explain their habitat, their life cycle, and their challenges. It’s dark and has comfortable couches. I sat down for a few minutes watching a fish tank, and I came very close to falling asleep right there!

Pin these so you can remember to start planning your trip to Linz! 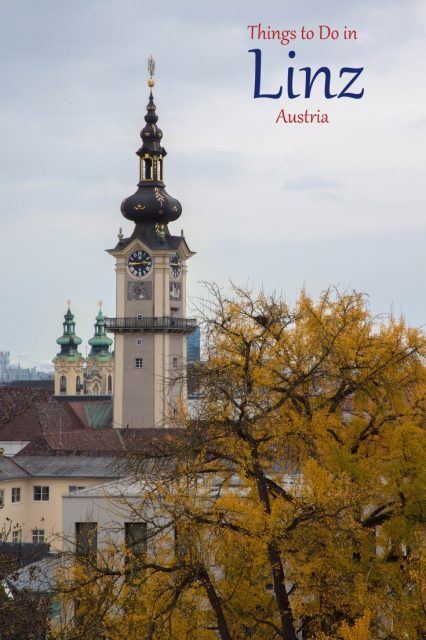 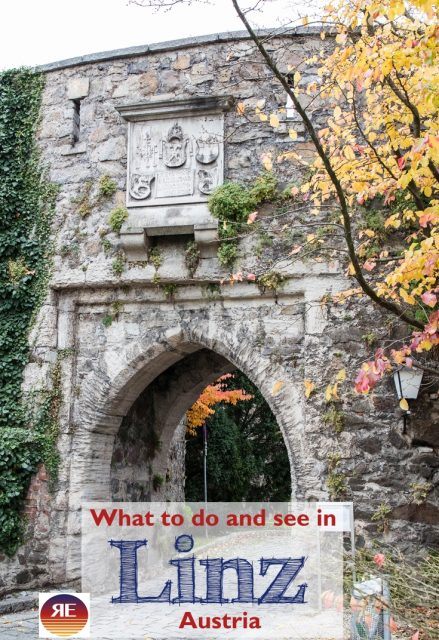 “The Center is the Museum of the Future—the place where all the diverse blends of artistic genres, scientific domains and technological directions are displayed and processed.” This is how their website describes what you can expect at this technology-rich, hands-on museum. The exhibits range from bio-technology to media art, anything that is up and coming, new and innovative makes its way here. Exhibits on prosthetics, virtual reality, graphic art of all kinds, and even a kids’ research lab are just some of the things you can experience while visiting. When you buy a ticket for it, the ticket is good for 24 hours, so there is no way you will miss one of the shows they put on throughout the day. You might want to add a full day into your Linz itinerary just to experience Ars Electronica.

Opening times: Most days the center is open from 9:00-5:00, but closed on Mondays and some public holidays.
Cost: 9.50 Euros (24 hours), however there are many discounts and prices on Tuesdays are only 4 Euros, so check the site before you go to pick the best day.

Wander the Old Town and the Banks of the Linz Donau

Whether you want to shop, marvel at the gorgeous architecture, or visit one of the many Linz museums, you will want to take the time to wander along the medieval streets and cobblestone roads of the inner city. Our group did a photowalk through the downtown area and we couldn’t believe how photogenic it was. Wells, arches, windows, statues, there was so much to see. Take a look at some of these gorgeous images. 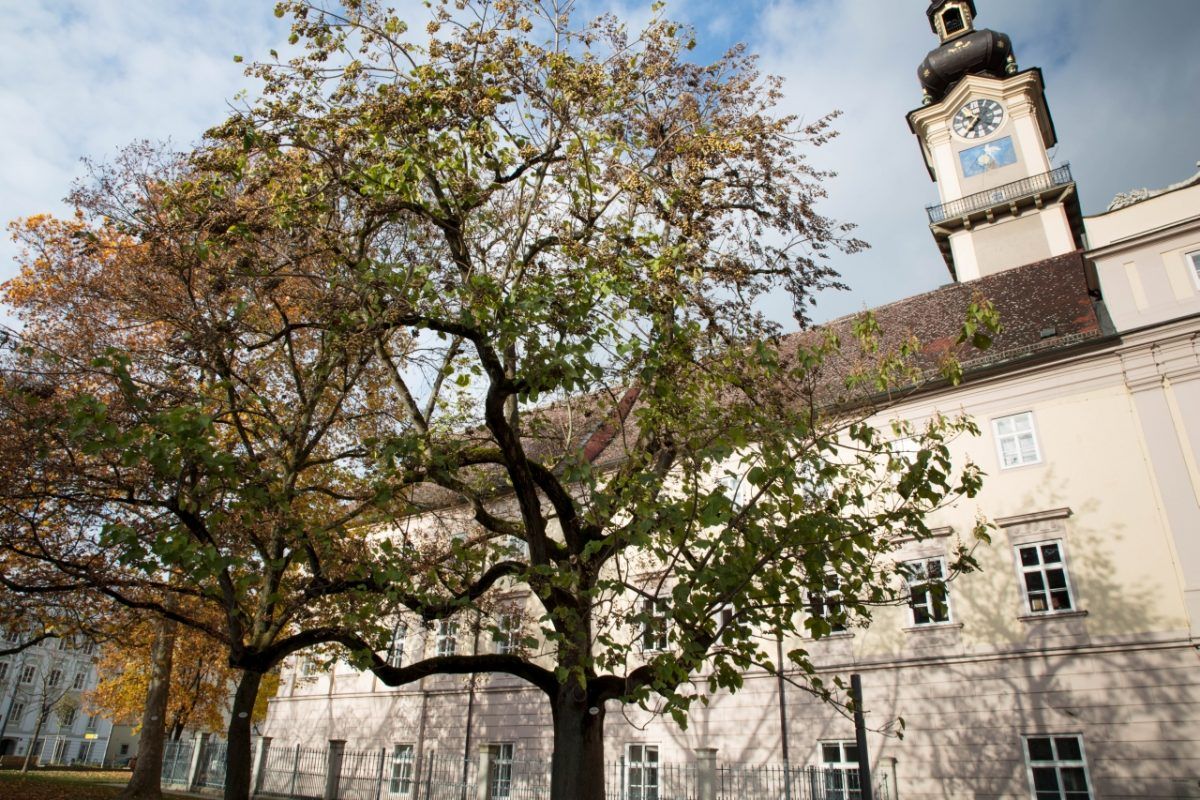 The Oldest Bakery in Linz

With all the great things to see in Linz, we walked and walked, and had a great time, but we were getting a bit hungry and foot-sore; it was time for a break, and Austrian food is amazing.

For a coffee break, we headed to the K.u.K. Hofbaeckerei, the oldest backery in Linz. They serve delectable pastries and one of their specialties is the Linzer Torte, purportedly the very first cake recipe in the world, and a must try when you are in the city. The cafe is very small, and if you go on a day that threatens rain, like we did, you might have to wait your turn for a table or just take some tortes to go.

The Best Lunch Spot In Linz

For a good Austrian traditional lunch, though, you can’t do better than Leberkas-Pepi. Jim and I had tried leberkäse, which literally means liver-cheese, before in Germany. I didn’t really know much about it, and with the name I just assumed it was made from the throw-away parts of a pig. Boy, was I wrong. Apparently it did contain liver in the original versions that are over 200 years old, but today’s meat loaf is made of the finest parts of pork and beef. The other myth that was blown open when we tried it was that there are many varieties. 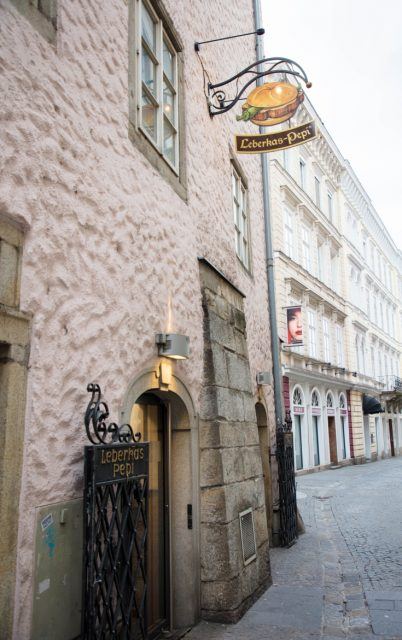 Leberkas Pepi has a few stores, but we wanted to eat at the original one right downtown. We walked through the unassuming front door to a small, cave-like restaurant, which only had a few small tables on the periphery and a few seats at the bar. We sat at the bar so we could take in how it’s all done. In this cafe, they serve really only one thing, leberkäse, but, as I mentioned, many varieties. When the waitress asked what we wanted, I asked if I could have all of them, small pieces. She understood right away. She pulled out a platter, and proceeded to wrestle the huge loaves of pressed meat one by one until we’d had a small slice of each kind accompanied by some pickled onions, pickled turnips, green pickles, green and red peppers, bread rolls, and some condiments.

We washed it all down with some bottled fizzy water and were more than stuffed when we were finished, but I couldn’t have been happier to really start to understand such an iconic Austrian food. It was definitely one of the highlights of my day.

Linz is serviced by its own airport, but most people going to Austria fly into Vienna. Of course we had our own car and it was a simple drive on good roads from just about anywhere.

From Vienna to Linz by car it takes about 2.5 hours on the A1, but it’s a much prettier ride to drive down the Donau and the Wachau Valley. It will take you longer, depending on how many stops you make to visit the gorgeous towns and castles along the way. Another way to go is by train and it’s only about 1.5 hours that way.

Since Linz has always been known for its industry, it’s very easy to get around with buses and trams. Tickets for short distances start at 1.10 Euros, but you can get a day pass for 4.40 Euros.

Linz is a great Austrian city to spend a few days in and really get to see some amazing things. It’s easy to combine with a trip to Vienna and the Wachau Valley as well.

Have you been to Linz? What are some of your favorite Linz attractions?

Pin these to remember to start planning your Linz Citybreak. 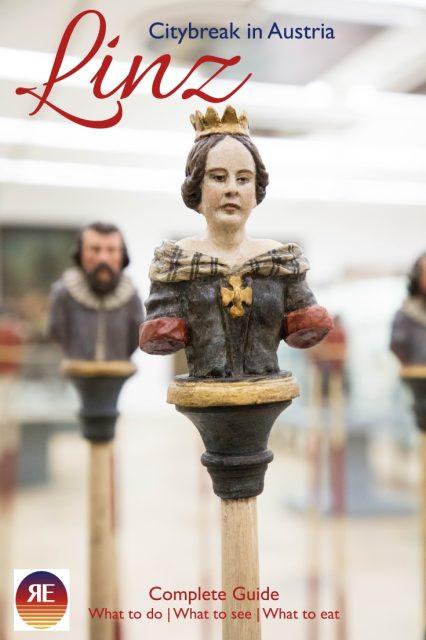 2 thoughts on “Top Things To Do In Linz, Austria”