Home » DIY Travel » Guides » The Pyramids of Giza, Are They Worth It?

Where is your favorite place in the world? I often get this question when talking to people about my travels. I never have an answer. There are so many awe-inspiring places, sights, foods, and people that choosing just one is impossible.

Like many people, I grew up with ideas of places I wanted to go when I was older, and someplace I always wanted to go was Egypt! The continent of Africa has always been a draw, but the top of that list, just like its place on the continent is Egypt. I couldn’t wait to go.

The Pyramids of Giza

In our Social Studies classes at school, one part of the textbook was devoted to those ancient Egyptians whose technology was far and above anything the rest of the world could conceive, let alone execute.

I wanted to learn how to read hieroglyphics, climb down into the tombs of the kings, and imagine what life would have been like hanging out with Cleopatra. I’m pretty sure the Kardashians had nothing on her! So with all of my wishes soon to be fulfilled, I was off to the land of the Pharaohs, water horses, and the majestic Nile River.

Anyone landing in Cairo knows the feeling of frenetic excitement that comes with standing in the line waiting for the customs officials to paste real stamps in your passport, then filing out into the total chaos that is Cairo.

Traveling on our own, we had a few errands to run. We had to go to the train station and buy our tickets on the overnight train to Aswan, and then we had to find our way to the pyramids…priority number one!

Taking a Taxi to Giza

Taking a taxi from our hotel, we knew we had to negotiate our fare beforehand, and felt that we did a pretty good job of it, but it was getting late in the day, and we just wanted to get there.

As soon as we got out of our taxi, the touts swept down on us not unlike a flock of buzzards on some new road kill! Yes, it was a little overwhelming, but we just politely said, “No thank you,” and continued on to the ticket office.

This was the first venue where we noticed the significant difference in prices for locals and tourists. Many places have a small difference, but in Egypt it is astronomical.

Now, you can see the pyramids from outside of the park, but to walk around them, in them, you have to pay. We balked a little, because, wow! But the reality is, we were going to pay, and the Egyptians knew it.

I had been waiting my entire life to walk where the pharaohs walked. I wasn’t going to miss it. In fact, we had already decided that we would completely do up the tourist thing and either ride camels or horses or something while there, because we could!

I think we were quite lucky that we went late in the afternoon. The sun was about to set, which meant that the horse vendors would soon have to go home. They really didn’t quibble too much on the price we were willing to pay. One last sell was one last sell.

Riding around on horses around the perimeter of the park, getting uninterrupted views of the pyramids and the Sphinx, even though it was quite windy, was exactly what we thought it would be. We loved it.

We took our time, wandered among the ruins, went inside Cheop’s pyramid, and mostly had the place to ourselves. I highly recommend going in the evening. It was almost magical.

When the sun began to set, and the colors lit up the sky with the pyramids and the Sphinx in silhouette, I knew I had made it to a place that I had always wanted to go, and I was not disappointed!

Visiting Giza was our first foray into Egyptian tourism, with the yells of “baksheesh” (tip) and the touts coming out of every alleyway, magically appearing as you arrive anywhere in the country. We learned that just politely saying no, and sticking to the price that we were willing to pay, served us well. Do we think visiting the pyramids of Giza is worth it? Yes!

Have you wanted to visit Egypt? The Pyramids? What is stopping you? 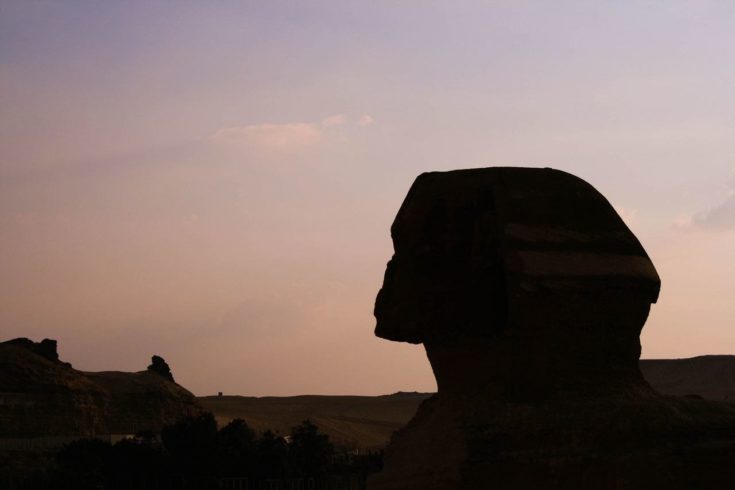 Our Trip to Egypt - Travel Blog

Our overview, guide if you will, to Egypt has recommendations, and itinerary, and much more. This should be the first thing you read before planning a trip to this trip of a lifetime. 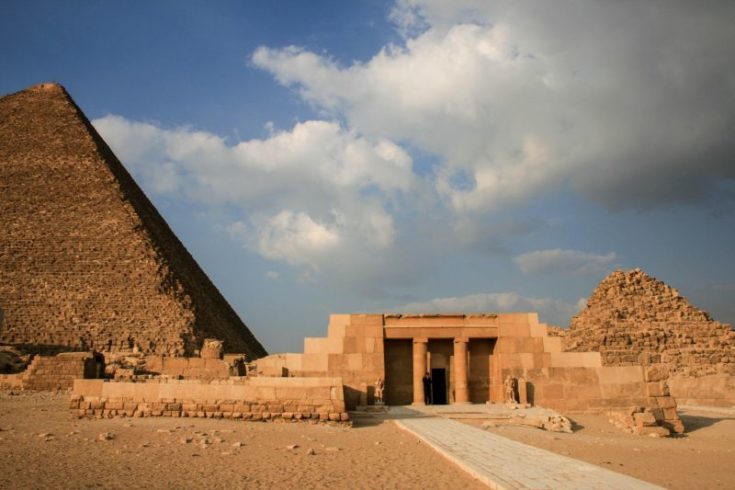 Top 10 Things to do in Egypt

This article lays out the "biggies" for you. We tell you our favorites, the must-dos and how to best include it on your itinerary. 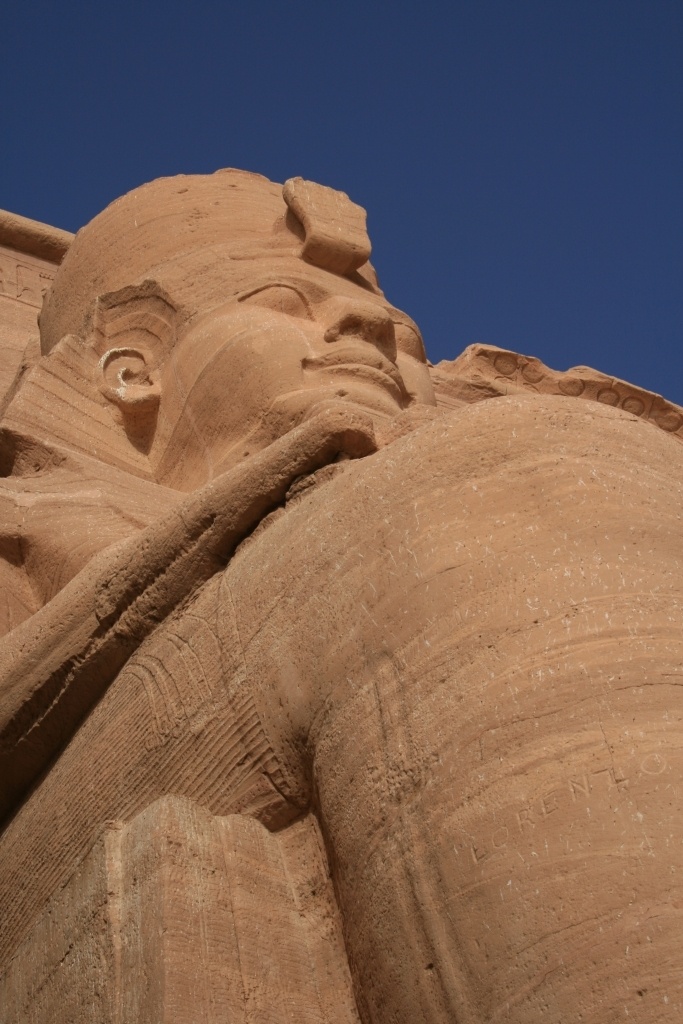 The most majestic, adventurous world heritage site I've ever been to, Abu Simbel is a must! Check it out.

I loved my time at the Pyramids. For some reason, the day I was there it wasn't very crowded. I also went back another evening for the light show. It was a bit tacky, but I still loved it! Thanks for linking up. #TPThursday

Nancie, Yes, it's just one of those places that captures our imaginations!

I've always wanted to go, but we will need to really save up for this one. It's on our dream list and when we go we will want to do it up. I usually don't mind paying a separate price as a tourist for entry fees either.

Karen, It is an expense to get all the way to Egypt, but except for some tourist sites the rest of the prices are pretty decent.

The title of this post made me expect that you would decide it wasn't worth it. I'm glad you enjoyed it! The touts get really annoying (especially when you're travelling with a teenage daughter), but just repeating "No, thank you" over and over again seemed to work for us. And the pyramids are indeed magical. The other advantage of getting there late-ish is that the light is perfect for photos!

Rachel, Exactly! The touts were everywhere in Egypt, but we soon learned how to deal with them in a friendly manner.

I enjoyed my time in the Pyramids (I visited months after the Iraq invasion so there weren't many people around even though Egypt had nothing to do with it). It is hard to grasp the magnitude of these structures form a photo. It is very different when you are in front of them and see the huge blocks they are made of (or try to climb them which is not easy).

Ruth, Yes they dwarf you and everyone around you. Even as a child, when studying Ancient Egypt, I just thought they were the size of a regular building.

I took my kids to visit the pyramids in April. We were in Sharm el Sheik and I wasn't sure how safe it was. They really really wanted to go so we went by plane for a short trip to Cairo. The pyramids were great! We went inside and did the camel rides etc. The touts were out in full force which wasn't that pleasant. With the children in hand, the easiest option for me was to buy nothing. We also went to the Sphinx and thought it was a bit disappointing. Crowded with vendors and seating for the light show, overlooking fast food joints etc.

Shobha, It's good to hear that you just went to Egypt with kids. Aren't you glad you did?