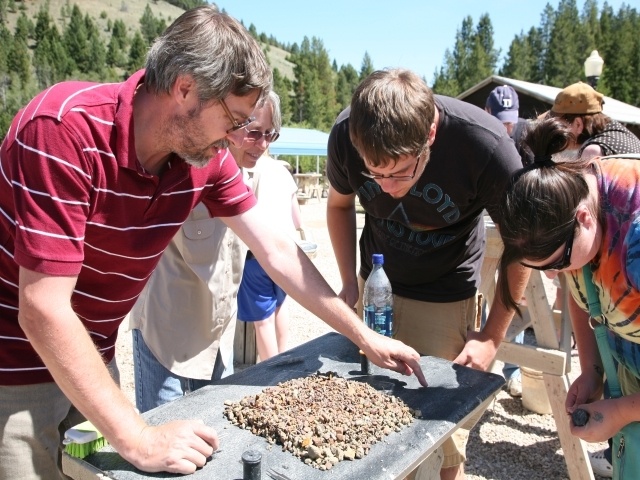 One thing about a far-flung family is I get to visit all over the U.S. when completing my rounds. We drove from Tacoma to Stephensville, Montana to visit my mother-in-law.

Montana is a beautiful state, and one of my favorite pastimes is to take photos of all of the barns and wide landscapes as we drive along the interminable stretches of highway. We rented a car in Tacoma for our visit, but we didn’t make it full on Montana road trip out of this opportunity. Maybe next time, because the views, the mountains, the prairies, all gorgeous.

On one of these drives, we took a dirt road over some mountain to reach Philipsburg. Jim’s mother had told us about a place where we could look for sapphires,and we were all ramped up to do some legitimate rock hounding.

I’ve always picked up interesting rocks my entire life. Yes, I have more than five…a collection. They’re not very organized, though. They’re just memories. I have a few cool ones, one with a ghostly face in it from driving the Haul road in Alaska, some amber from Japan, some obsidian from Easter Island, and such, but I’ve never gone out with the intention of looking for stones or gems.

After driving over the mountain through evergreen forests and passing a number of waterfalls, we entered into the valley where Gem Mountain is located. It is a river valley that is flat, flat, flat…until it’s not and then the mountains shoot up.

The sky was a crystalline blue with a few wispy clouds. We arrived about mid-morning, so it was just starting to get hot. Even though we knew what we were headed out to do, who brought head gear? I had went and bought a bandana. The sun was beating down on us the entire time, but it didn’t deter us from our mission at any point.

At Gem Mountain there is a sapphire mine that is set up with buckets of gravel for anyone to come in and pick through to find their own sapphires. It may not sound like fun, but you would be surprised how absolutely addicting it is. I talked with one man who had been coming two to three times per week for the last ten months.

This is not free; it’s completely organized. The real mine digs up the gravel that has one of the best deposits of sapphires in the country, does the first straining and washing to get rid of the big rocks, then puts the remaining gravel in buckets.

There is a distinct process for finding the sapphires. First, you go pick out your bucket. Of course, you can’t tell which buckets are going to be loaded with gems and which ones aren’t, so you just hope the one you pick isn’t a total dud and you can find something.

You take your bucket to your table, which is equipped with a mesh square strainer, you also take along with a small film canister with an “X” slit in the top to put your gems through, a pair of tweezers, and a brush. The brush is to sweep away the excess grave that you’ve already picked through. My new friend told me he never uses the brush, because he wanted to make sure that no gem was overlooked.

After dropping off your precious gravel and tools, you pour some of your gravel in the strainer, then take it all over to a trough of murky water where you swish and bang and try to get rid of all the bigger rocks and clean the gravel. Returning to your table, you quickly flip the remainder on the tabletop to begin picking through it to find your treasure. It is at this point that we discovered to really look over the wet gravel, because most of the gems we found were laying right on top of the pile at that point. Does that mean sapphires are heavier than the gravel they lay in?

We bought three buckets for our group of five…to begin with.  Then we went and bought another two buckets.  They sell each bucket for $15.00; you get a break at seven or twelve.  We should have bought the seven deal, because it was all Jim could do to stop me from buying more.  If we’d had better head coverings, we would have been there all day.  Totally addicting!  We all found sapphires.

The final and voluntary step, when you are completely finished is to take the sapphires you’ve found into the shop to one of the stone analyzers.  You sit down, they separate your find by what’s really a sapphire, what isn’t, what might be worth heat-treating or setting, and what isn’t.  Jim and I had found seven…not worth anything, but the fun of it.

Then Erika and Michael took up their nine that they found, and three of them were worth heat-treating, and one was a third carat peach sapphire, which supposedly is a rarer color than normal.  They were thrilled.  We were all thrilled.  The company doesn’t do any of the heat-treating or setting at Gem Mountain, so they send it off to be done.  It’s not very expensive and I was surprised that there is no hard sell.  At all.

We had such a good time with our first rock hounding experience, that we went home and did a google search on other places to do it around the U.S.  There are quite a few places, so it’s just one more thing to add to our list of things to do/research when going someplace.

We love getting outdoors in Montana, and we’ve heard that hiking the High Line is a must. Maybe that will be our next Montana adventure.

2 thoughts on “Rock Hounding in Montana”