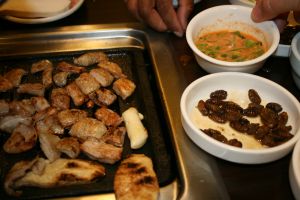 Aw, it can’t be that bad?  Millions of Koreans swear by them; what?  Oh, intestines, large ones – Makjang, a Korean Delicacy.  Apparently in Daegu, it’s the snack o’ choice to slosh down some Charm Soju.

So we order some; at least they don’t come to us in one long coil.  They’ve been cut into about 4 inch coils and are about 2 inches wide.  Mmm mmm good.  Our friend, Bruce, demonstrates how to cut them into little squares, by first cutting the side of the loop, flattening it out and then piecing it further.  They don’t look so ominous at this point (or maybe it’s because we’ve already had a shot of the Korean national drink… that is, Soju).  The pieces fry and fry, and finally they are ready.  We dip them in the mysterious red sauce that we think is bean paste with some peppers, and pop them into our mouths.  Surprisingly, they aren’t too bad, and the Soju is certainly helping.

If you look at the picture, though, you will notice a side-snack, some baby silk-worm larvae.  I’ve seen these being sold in bulk, at festivals, all over Asia.  Most times they are huge, usually at least 2 1/2 inches long and way too thick, so I’ve never been brave enough to try them.  At least the ones here are small.  Jim and I both tried one.  Yep, one.  That’s it.  We did it, and now we don’t ever have to try it again.

One thought on “Korean Delicacies – What to Eat in Korea”