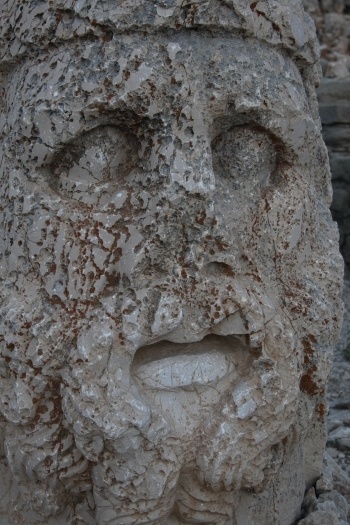 A small site in the Anti-Taurus mountains, the tumulus at Nemrut Dagi is supposedly at its best either at sunrise or sunset.  Since we missed the sunset, we chose to rise early and watch the sunrise.  Honestly, I’m not sure what the allure of going to the top of a mountain at sunrise is, but this seems to be a common theme all around the world…one I usually could have done without, and this is one of those examples.

Nemrut Dagi, a UNESCO World Heritage Site since 1987, is a small site that hosts the tomb of a little known king from the little known kingdom of Kommegene.  King Antiochos I (69-36 B.C.) is buried here, although no one has excavated his remains at this point, and besides the impressive statues, there really isn’t much to see.  Apparently Aniochos’ kingdom was quite impressive in its day, but he obviously liked to abuse his power, because he didn’t have to drag those stone to the top of the mountain.  He had plenty of slaves to do that for him, a great example of abuse of power.  If all the rulers were as self-indulging, it’s no wonder the Romans were able to conquer the kingdom and annex it to the Roman province of Syria around 69 A.D.

Luckily our guesthouse was right outside the gates to the national park, so it took us only about 10 minutes to drive to the parking area.  This added up to at least 30 minutes more sleep than the other poor souls had, and for that we were grateful.  However, once you get to the parking area, you must climb over very uneven, rocky steps to reach the peak, where it was windy and cold!  As the sun had not yet risen, it was extremely difficult to take photos, then we find out that there is no way to take photos of the statues in the sunrise.  Why did we get up so early?

Once the sun was up, there were so many people milling around, it was still difficult to photograph, so I just went from grumpy to grumpier.  We ended up with some decent shots, but unless you are a sunrise fanatic, I would skip the sunrise altogether.  It just wasn’t that magnificent, and I would have rather been there in the in-between popular times to have had a better chance at getting great shots.  However, the site is so small, it doesn’t warrant going more than once, so what I have is what I have.

If you, like us, tend to try and hit the World Heritage sites, I would think twice about this one.  There statues are big and different.  I love the big heads; who wouldn’t, but really, for the distance you have to drive to get there, I’m not sure it is really worth it.

7 thoughts on “Freezing on the Top of Nemrut Dagi”