One of our travel highlights – The Chobe River Cruise!

The first real safari we did in southern Africa was at the Chobe National Park in northern Botswana. We had flown in to Livingstone and spent a few days visiting Victoria Falls and other small parks in that area and then taken a ferry across to Botswana where we shuttled to our lodge in Kasane outside of Chobe.

The first day in Chobe we were eager to get into the park but wouldn’t pick up our self-drive rental truck until the next day. So we opted for a sunset river cruise, offered through our lodge, with low expectations. We had focused on the words river-cruise and were envisioning long, crowded river cruise boats with 50 or 60 fellow “adventurers” all jockeying for position along the rail trying to spot wildlife that had likely spotted us coming down the river and already fled to quieter locales. 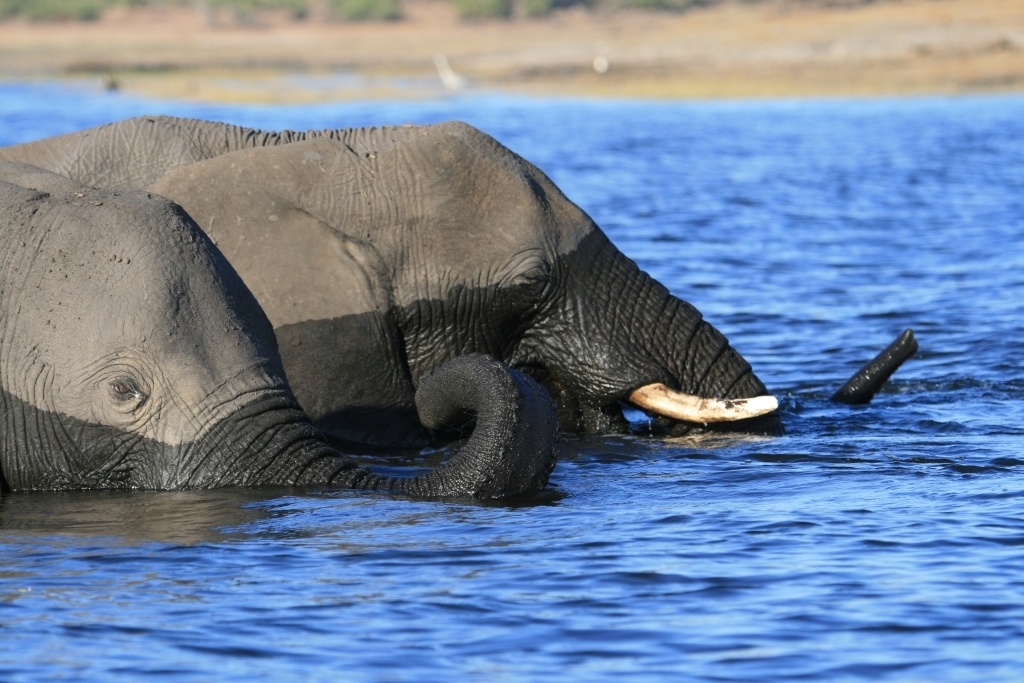 The truth, however, far exceeded our expectations. We did see some of those larger boats plying the lower river, but only the smaller, pontoon boats could travel any distance up the river and into the park. This river cruise was actually more of a water safari. There were only twelve of us on the boat including the driver/guide and everyone had a prime seat for viewing. I didn’t know it at the time, thank god, but I nearly lost my life on that trip.

The boat had swung close to the grassy wetlands bank of the river to look for puku antelope as this is the one place they can be seen in Botswana. We were all poised with Canons and Nikons at the ready and I was in a prime seat at the edge of the boat (in fact I had been able to keep cool in the spray coming up from the prow and had even considered going against the guides orders and splashing my hands or feet in the water). The boat slowed even more as someone spotted an antelope further in the deep grass. Our guide spotted it in his scope and was telling us it just a common antelope while throttling up the engine and getting us moving again

Additional Reading:
Traveling in Botswana
An Okavango Delta Safari in a Mokoro

Just at that same moment a giant gap-toothed, gaping head full of teeth and tongue came shooting up out of the water aimed directly at where my arm would have been if the boat hadn’t miraculously started moving up river. The timing was just off for the male hippo but perfect for preserving my life! I didn’t find out till much later that most deaths on the river are from hippo attacks just like that. At the time, I remember think, “Wow, that’s a National Geographic moment I’ll always remember.”

Shortly after, we had to slow again, this time for the majestic elephants swimming across the river, trunks snorkeling and blowing water the whole way. The photos from that encounter were amazing and the guide was very careful to give the herd a wide berth while keeping us positioned for perfect viewing. I can guarantee at least one of us was sitting well in from the edge of the boat despite the amazing scene taking place a few meters away.

For an awesome place to stay outside of the park, try one of the fastastic Chobe Lodges. This was our favorite accommodations on the entire trip. The thatched roof cabins were beautiful and super comfortable and the restaurant was superb!

Have you been to Chobe National Park?  Did you do the amazing river cruise?