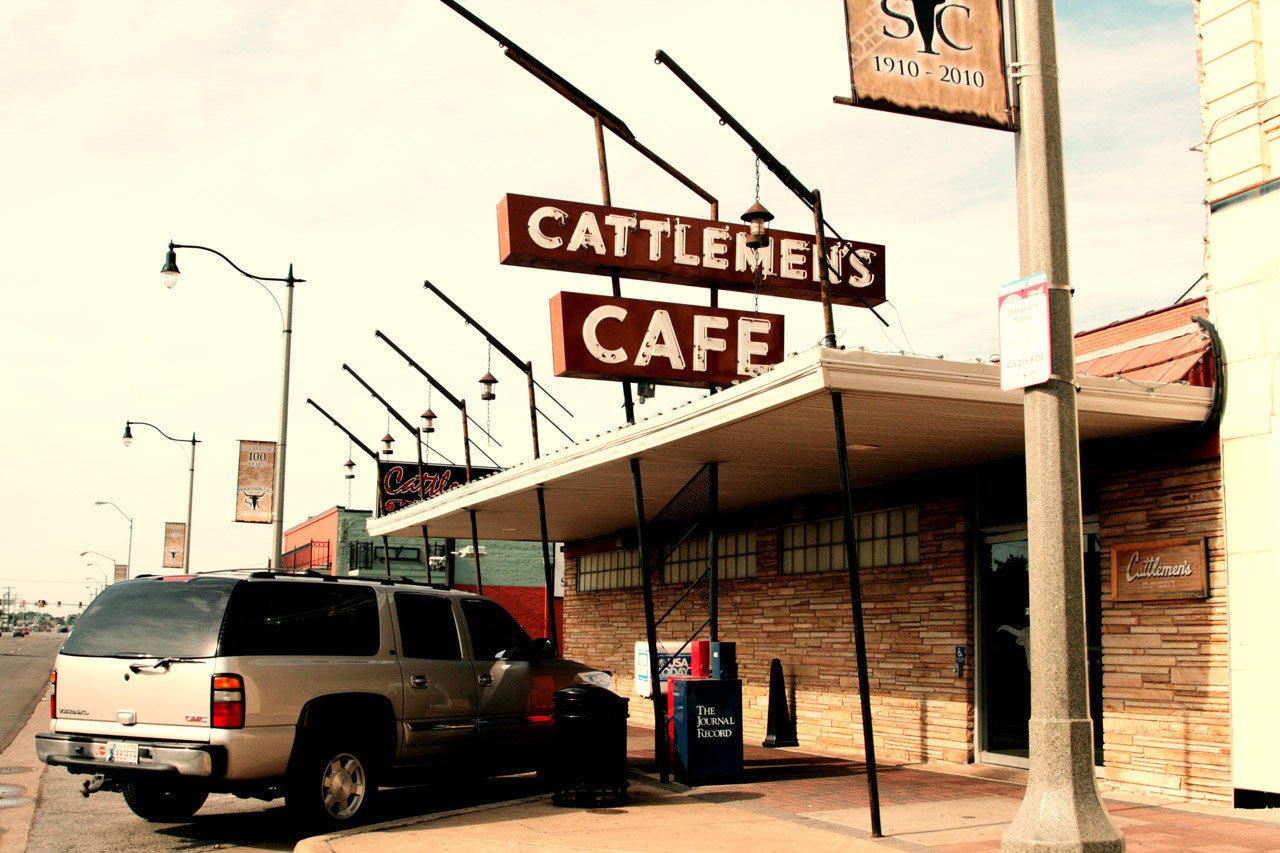 Just loving our time in Oklahoma City, we had to eat in one of the oldest, best restaurants in town, the Cattlemen’s Steakhouse.

In every western town in the U.S. where there’s cows, there’s steak. So we drove around the corner, on the main artery through town, and  there it was…the famous Cattlemen’s Steakhouse!  There’s no mistaking where it is at 8:00 on a weekday morning, because in this part of town there are not even parked cars anywhere except for in front this 1950’s storefront.

Upon entering, it’s typical decor for a watering hole that’s been around since the turn of the century.  A short bar winding it’s way down one full wall with booths lined up opposite, with a few stragglers in-between.  The walls are adorned with my favorite decor, old photos of the city, the stockyards, and it’s main source of income…cows. I wouldn’t say it was crowded this early, but folks kept piling in, and by the time we left, there was a waiting list. The waitress brought our menu, and already they were winning me over.  I just love a menu that tells the story of the establishment, and this particular one had been won in a dice game.  C’mon!  Who can beat that?

Opening up the menu, our mouth began salivating at once.   Who can pass up “the finest Midwest raised, corn-fed Choice Grade of beef ” that has been “slowly aged according to a closely-guarded secret”.  Not me. I definitely want in on the secret. Devon and I shared the steak and eggs, and we were both still full until dinner rolled around.  If we had been a little more adventurous, we may have ordered the calf brain and eggs, but I think that will have to wait until next time.  I don’t often order steaks in a restaurant, because well, my husband cooks them perfectly, but this steak was succulent, pure red meaty gold!

Go there. Eat steak.  Well, if you do try the calf brains, do let us know what you think!

One thought on “Where’s the beef? Cattleman’s Steakhouse OKC”