Bwindi gorilla trekking in Uganda is a once in a lifetime experience. This national park is home to 18 gorilla families. Learn how you can see them.

Our Uganda self-drive had been nothing short of fantastic up to this point, but trekking the endangered mountain gorillas was our number one reason for visiting. It was hard to sleep, because we were so excited.

Our flashlight lay waiting on the nightstand, and when the alarm went off we struggled through the mosquito netting to reach it. We thought the lights would not go on since we were staying at an eco-lodge. The electricity is turned off between the hours of 10 at night until 7 am. Luckily, the reason people stay here is to track the mountain gorillas of Bwindi, so they did turn on the lights at 5 for us to get ready.

Lake Mutanda is surrounded by poor dirt roads with little signage. Driving in the day before, we only observed one sign pointing to the Bwindi Impenetrable Forest where the mountain gorillas are located. Luckily, Jarrod, a free lance guide working out of the lodge, offered to drive us for a small fee. We took him up on it.

Even though we love to drive ourselves, we’d paid the hefty permit fee of $700 per person to see the gorillas, and the last thing we wanted to have happen is to get lost and not make it, especially in the dark.

It is quite a drive, up and around the mountain, to get to the visitor’s center where you are first checked off on a list that the police have. First hurdle accomplished since we of course had paid for our gorilla permits, we were ushered into a covered area to have a safety briefing.

The briefing is for your safety as well as rules for how close you can get to the gorillas. They explain that gorillas are also very susceptible to human disease and viruses, so you are not allowed on the trail if you are coughing or have other cold or flu symptoms.

There were about 21 people in the briefing with us, but the tracking groups are no larger than eight, so we split into smaller groups going different directions. Jim and I headed out with the other six in our group, our ranger and guide, and one policeman, as well as a few porters to help us carry gear or just help us make it up the hard parts.

Porters are from the local village, and we are encouraged to hire them to keep the locals working with the Uganda Wildlife Authority. We hired two porters who were both in their twenties still trying to pay for secondary school, and even though we probably didn’t really need them, I felt it was money well spent.

I’m not sure why we had a police escort, but our’s was Eric and he got to do the gorilla duty about once a month, where he hiked and talked with tourists. He loved it. We immediately started downhill, which is one of those bittersweet things.

How Difficult Is The Trek?

I’d expected to climb right away, and maybe would have preferred climbing first instead of on the way back, but we were heading out to meet up with two more rangers who had found the family of mountain gorillas we were going to observe.

The path was just wide enough for one or two people, and it had rained recently, so in some parts it was rather slippery. However the going was rather easy. We hiked for about 25 minutes, just getting going really, when our guide Benson announced that we were there. I have heard of other groups that had to hike for hours before finding a gorilla family, though, so you can’t be certain.

We looked at our surroundings and were surprised, we were at a junction of two tracks, near a river bed, and we didn’t see any gorillas. They shushed us, though, and we could hear something quietly rustling about in the overgrown forest around us.

Slashing Our Way Through the Impenetrable Forest

Everyone started to get excited, whispering, and the eight of us had a hard time following directions. We were told to leave everything with the policeman and porters and only take our cameras.

We also had to put on garden gloves because we were delving into the forest proper, off the path. It seemed to take a long time, all of us hoping that the gorillas weren’t moving on as we got it together, but finally we were ready to follow our two new rangers into the deep, dark forest.

Straight out of “Indiana Jones,” the rangers used machetes to cut us a path deeper and deeper into the dense undergrowth. It is very difficult to see in front of you, because the leaves and branches and vines were so thick. We used both hands to part the branches; grabbing onto thorny stalks to keep our balance. This is where the gloves really came in handy!

All of a sudden our little group came to a halt in our newly carved green tunnel. Those in the front of the pack jostled around and were quickly bringing the camera gear to bear. We had found the mountain gorillas!

There were a few really special moments during our time with the gorilla family. At one point, a mother carrying a young one on her back walked past me followed by the silverback. He decided to lay down about eight to ten feet from us, and she groomed him for a good 20 minutes. It was very moving.

Is It Worth It?

The Uganda Wildlife Authority (aka UWA–pronounced you-ah) regulates the visitors to the park and how many people can see the endangered gorillas. The program is extremely well-managed, the rangers are well-trained, and the utmost care is given to not stressing the gorillas or putting anyone in danger. Therefore, you are only allowed to observe them for one hour. However, this hour does not include your trekking time, only gorilla time.

This seems like it wouldn’t be enough time being near the gorillas, but it was. Gorillas are huge animals, and although our time with them seemed gentle, my heart was beating extremely fast. They are habituated to humans, quite used to having people around, and they seemed to know that we were only allowed an hour.

I’m not sure how long they’d been there before we arrived, but when our time was up, and we were getting ready to move out, when they too left, climbing over the river and up the mountain on the other side. One of them even stopped to watch us gather after traversing the river with our rangers’ help, as if to wave us goodbye or make sure everyone was alright.

As soon as you know the dates that you will be going to Uganda, it’s a good idea to purchase or have your tour company purchase your permits. Because they limit how many people can go trekking each day, they sell out very quickly. Our contact asked us for a couple of alternate days we’d like to go, just in case they were sold out on our first choice.

It’s a tough situation, because UWA cannot guarantee you’ll see gorillas on your trek. They are wild animals after all, and your permits are only good for the day you purchased them. No exceptions.Because of this, we met one couple who had purchased permits two days in a row.

Luckily, they saw gorillas both days, two different families. You can purchase the permits from the UWA office in Kampala or inquire with your lodge or tour company, they will usually be able to buy it for you. Permits cost $600 in the high season or $450 in the low season, and you can buy one for any day of the year, even Christmas.

Getting to Bwindi Impenetrable Forest

Since it’s early and dark when you go, even if you have your own car, it’s a good idea to hire a driver from the lodge. Either way, be sure and plan for enough time to get to the meeting point safely. There are a number of great lodges very near the park so you won’t have to journey as far on the morning of your trek. We recommend Nkuringo Bwindi Gorilla Lodge if it’s available. We loved it.

What To Bring For Your Bwindi Gorilla Trekking

We each brought a camera, and Jim mostly took video. As far as lenses, we opted for a 70-105 mm zoom. I had heard the gorillas were usually pretty close to you, so I didn’t want a very long lens. On our trek, some folks just used their phones and we were close enough that they got some fantastic shots.

You will also need good garden gloves, hiking boots, rain gear, and a hat. Insect repellent is also a good idea. Don’t forget drinking water! Each trekker must have 2 liters of clean drinking water and a lunch.

Bwindi gorilla trekking in Uganda is certainly a bucket list item. Surrounded by a stunning national park, the mountain gorilla families are well taken care of by the rangers. Watching a female gorilla groom her mate is priceless. 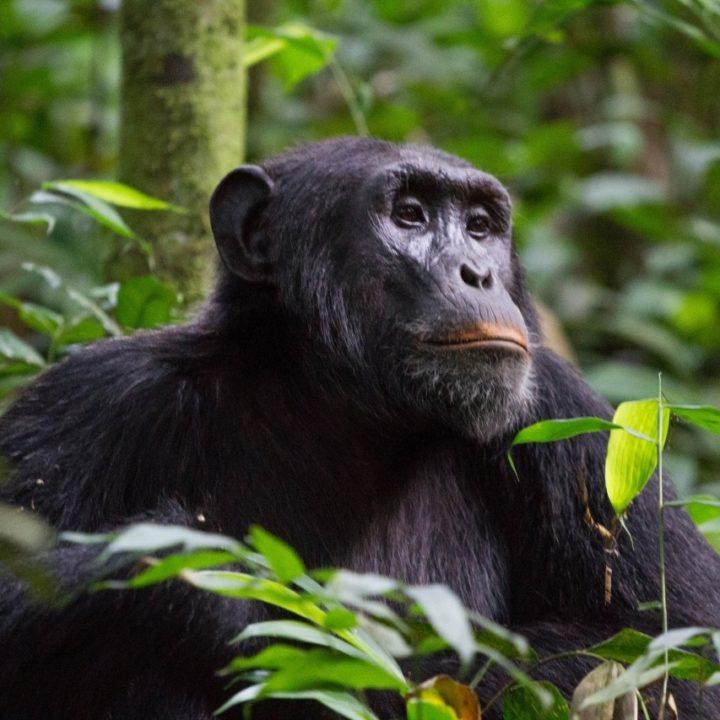 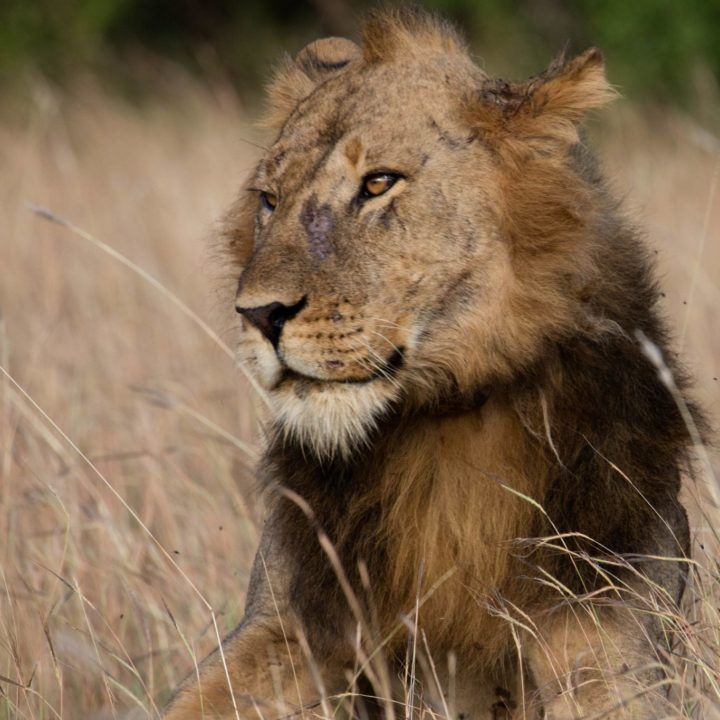 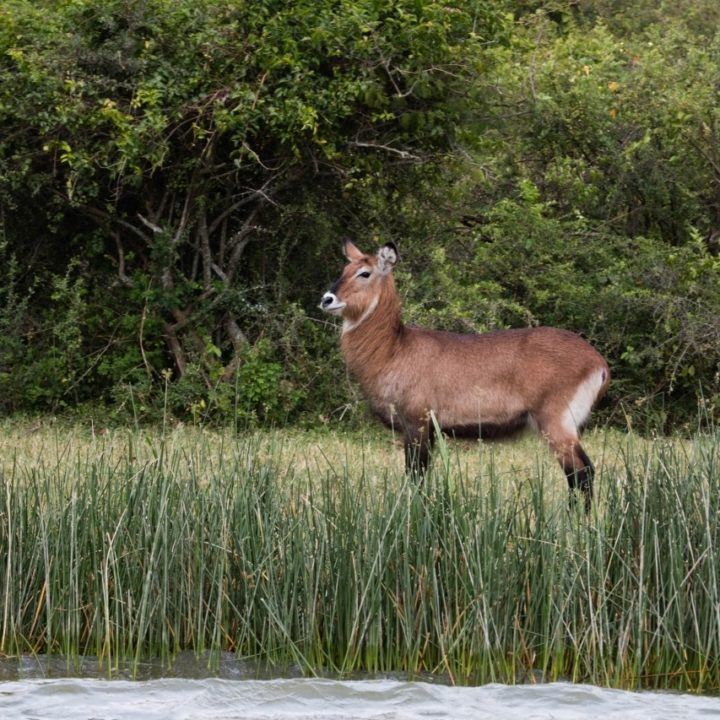 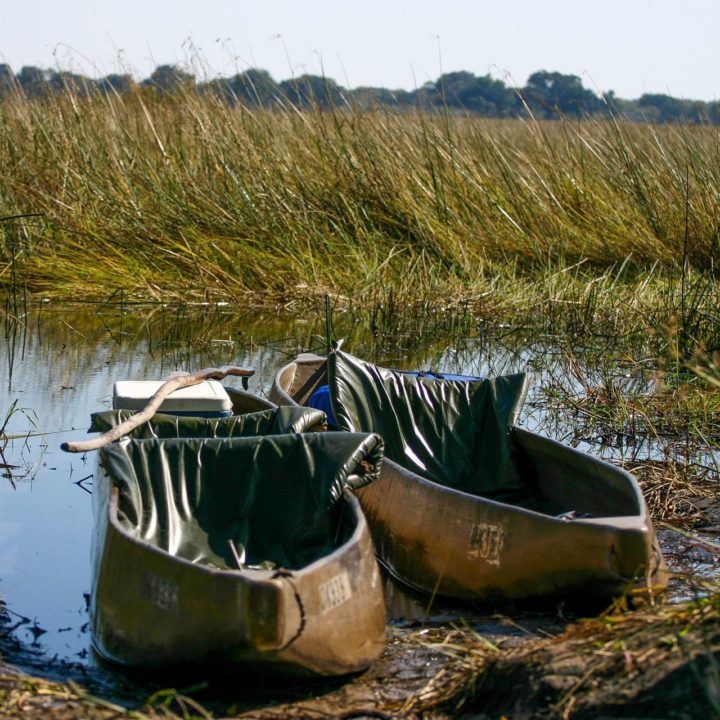 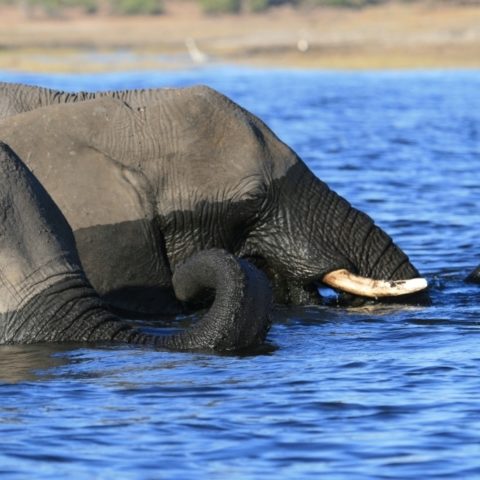 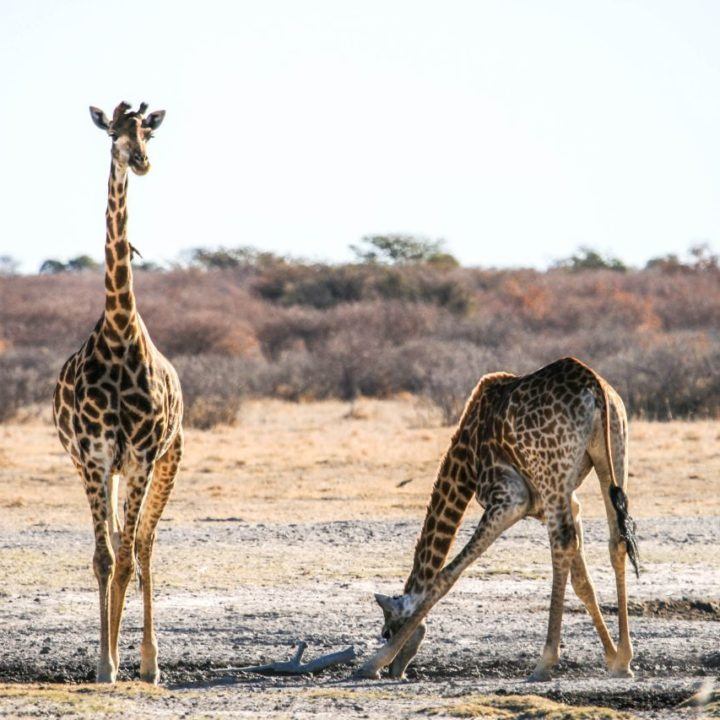 How to Visit Botswana! 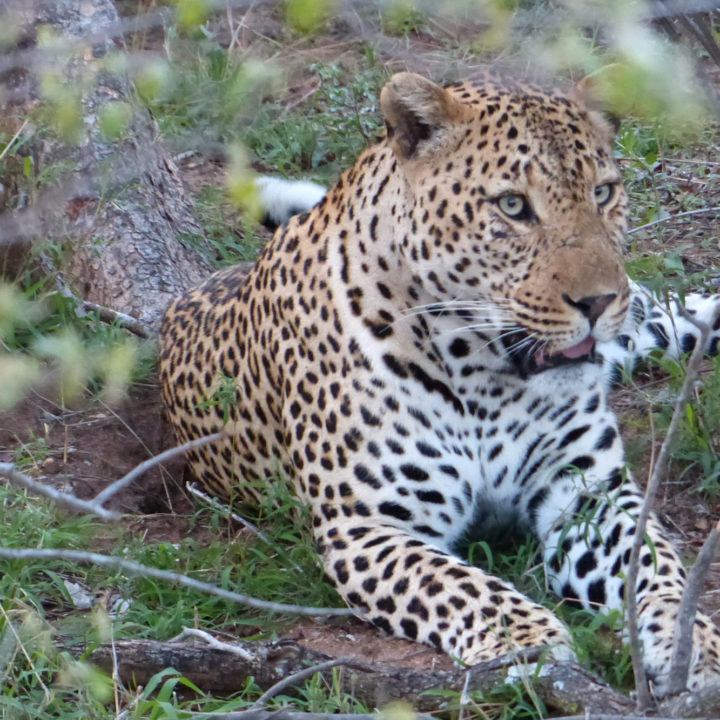 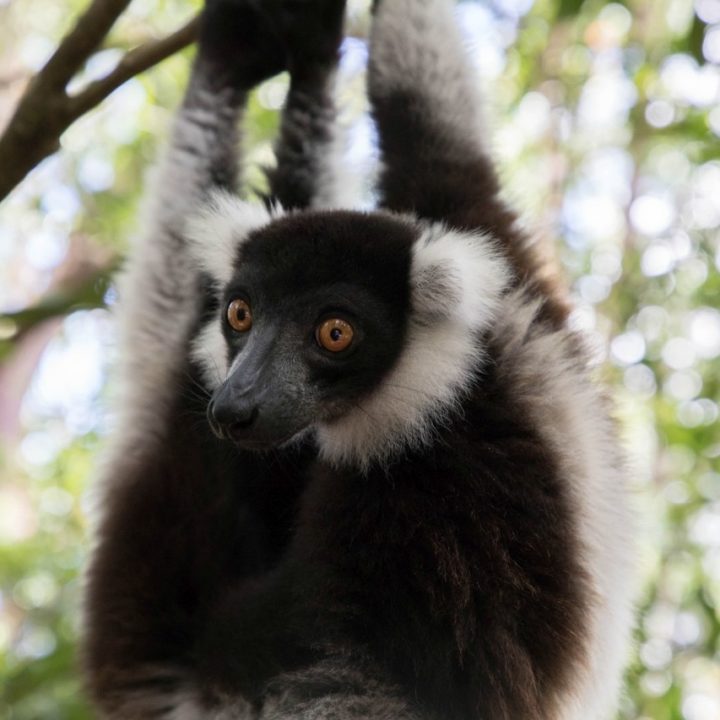 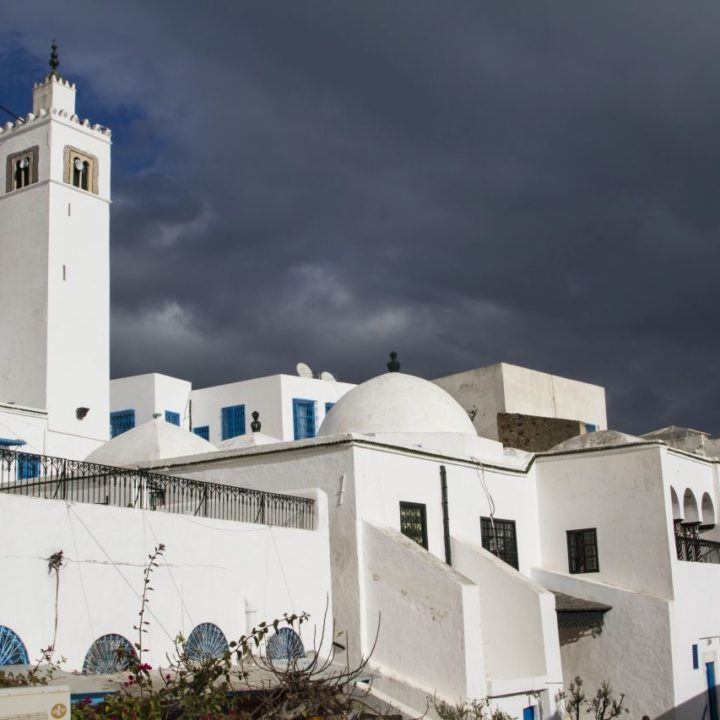 This just sounds incredible. What a truly once in a lifetime experience. I can't wait to do it myself!

Moira, It was amazing. I hope you get to do it soon!

That looks like such a great experience and I can't wait to do it one day. Thanks for all the tips. Those gorillas are so beautiful and it must be so amazing to see them in their natural environment. Great photos.

Cindy, It takes your breath away to be in their presence. It was amazing.

That is an incredible experience. I like how you were encouraged to hire extra people from the local community. An income stream into the local community helps put value on the preservation of these great animals thus helping insure their continued existence and protection.

Rhonda, You got it. The UWA has done a fantastic job with the local communities and really stresses to the tourists how important it is. It was an amazing experience.